So Friday arrived and the first game in the ‘Kroak’ league was set to be played. Myself vs Stevie’s Ogres. I’ve previously gone through his list here: The Ogre Conundrum so I won’t go through it again.

My completion list can be found here: Creation of the Throng

We rolled Dawn Attack, which is played as per the WHFB rulebook except the table is divided into quadrants and the gain 1 point for each of your own and 2 for each of the NME’s you ‘capture’. To capture you need to have the most number of fortitude scoring units in the quadrant.

We rolled a normal river and 3 buildings. Two had 3 pieces of wall, 1 set counted as hard cover, 1 set as soft cover. After placing terrain it looked like this: 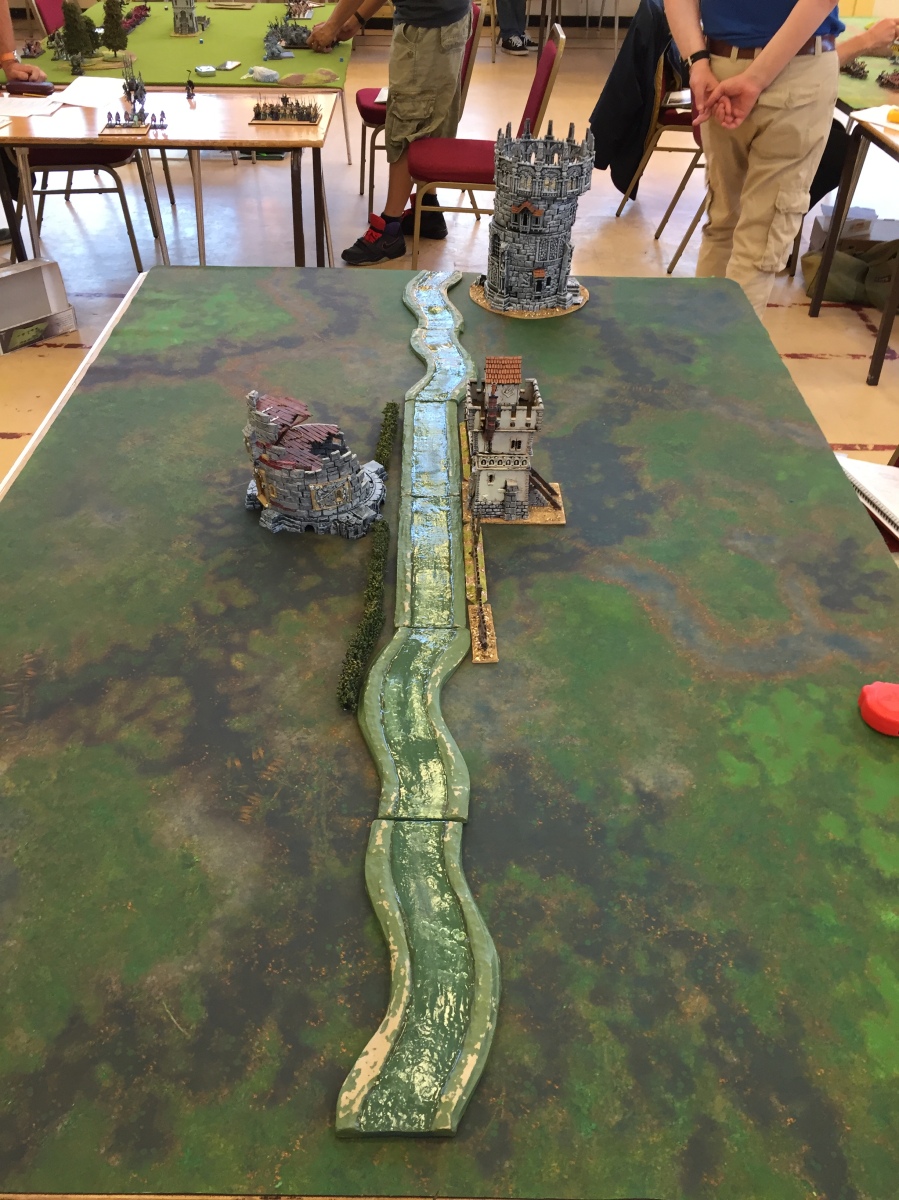 As Stevie said when laying the river, it makes working out the quadrants easier. He placed one of the centre buildings and fences so I matched his placement on the other side. I’m sure the farmer would have wanted to prevent livestock falling in the river…

Unknown to each other, we both chose ‘Stash the cash’ and both picked the tower at the edge of the board. I’ve previously covered missions here.

Dwarf hatred was general vs general.

Barlin led the Silvertop Gateguard out from under the crumbling stone archway, shaking his head at the state of repair of this section of the Karaz Ankor. No sooner had he exited then the his cousin Harek followed with the Flamewardens taking up a flanking position. To his right he could see Drugin and the Old Grumblers emerging from the next hidden doorway but he failed to see the artillery or the Brotherhood of Doomsayers.

Seeing Drugin gesturing to his right, he squinted and made out the glint of a cannon and a haze of orange far in the distance. The Wazzocks, he thought, you can’t trust the brotherhood to follow simple instructions. Still, Burrnoth was pretty grounded for an engineer so he would have to manage that flank until they could get to him.

Stevie won the roll for table selection (and chose south) and so was required to set up first. All his units went in the middle section with the exception of the Hunter on Stonehorn who was on the left flank and the Ironblaster that was on the right.

The Dwarf war machines and Gyro went on the right flank and the Irondrakes and Hammerers on the left. Everything else went in the middle but resulted in the dwarf force being split in two.

It’s worth noting that any errors in this report will be down to my notes/memory.

Burrnoth set aside his shovel, Little Betty having being entrenched. The ground started to shake as the ogres and the giant stonehorn advanced on his position with speed. To his left the botherhood were literally frothing at the mouth, eager as ever to get to grips with enemy. He muttered a prayer to Valaya that they would hold until he had managed to get off a couple of salvos.

The ogres got first turn and marched forward as far as possible. The exceptions were the Gnoblers, who being sneaky cowardly greenskins, immediately hid in the centre tower. The Ironblaster also maintained it’s position behind the right tower.

The average magic roll (3,3 with 1 ogre channel) allowed the Ogre general to cast the boosted trollguts. The resulting miscast killed one irongut outright. The maneaters finished off the turn by shooting a few of the quarrellers opposite them. 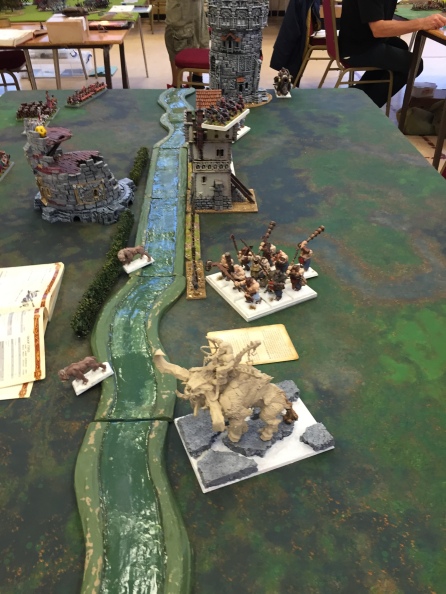 The dwarves responded on the left flank steadily moving forward. On the right the slayers failed to contain themselves and moved forward as far as possible and the gyro moved to block the stonehorn from charging the artillery.

Shooting was somewhat ineffective, mainly due to trollguts and Stevie’s ability to get a 4+, with a single wound on the sabre from the quarrellers and the stonehorn and hunter from the OG. 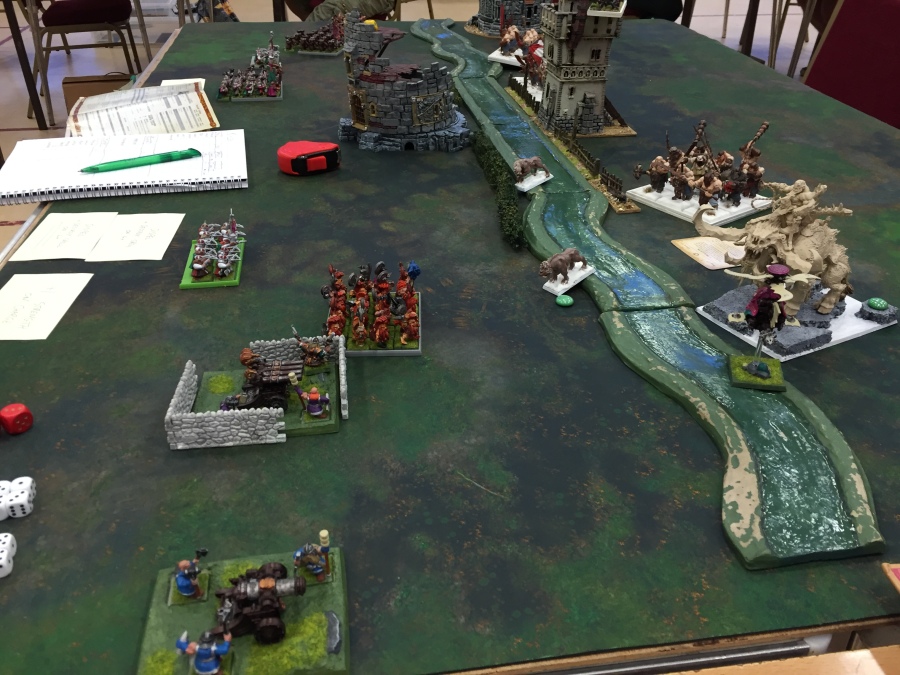 The Ironguts attempted to charge the Brotherhood but tripped over the hidden rocks in the river. No such trouble for the Hunter on Stonehorn, who smashed into the slayers with 7 of them meeting a glorious end pulped underneath it’s mass and a final slayer stomped for good measure. Not to be left out the Hunter leant down and skewered another 3 on his great spear. Not to be outdone the remaining slayers stuck back at the stonehorn, dragging the great beast down. With a low magic phase (2 dice each after a dwarf channel) the Slaughtermaster tried to cast Trollguts again on the Hunter but this was scrolled by Barlin (but not destroyed).

The nearest Sabre charged the cannon and despite no wounds caused from either side the charge was enough to send the crew running off the table with the sabretusk following.

To round off the turn, the Maneaters picked off another quarreller.

On the right flank the quarrellers moved up which allowed the OG to open fire on the sabretusk, which it duly did, leaving a red mist where before there was a feline. The combat between the hunter and the slayers continued with the former suffering another wound and 2 slayers falling as well.  The gyro moved up and fired it’d steam cannon into the ironguts, killing another.

On the other flank the Flamewardens found their range slaying 2 ogres outright.

The Ironguts finally succeeded in charging the slayers and the Maneaters charged the Shieldbeards. The Ogre unit decided they had better seek cover after being on the receiving end of the Flamewarden’s drakeguns and moved into the right tower. The ironblaster finally moved out of cover and immediately misfired which would put it out of action for another go as well.

The Slaughtermaster cast Trollguts which was destroyed by Harek and the cast toothcracker on the Ironguts. The following Dimensional Cascade killed 2 ogres and put a wound each on the ogre general and BSB.

In combat the Maneaters tore through the Old Grumblers killing 13 on the charge for the loss of 1 of their number. The Ironguts stacked the odds against the slayers finally killing that unit and overrunning into the quarrellers.

The quarreller unit charged into the flank of the maneaters to support their brethren. whilst the hammers moved up ready to rear charge them in the next go.

The Organ gun caused 1 wound on the hunter leaving him with a single wound left. The gyro fired on the gnoblers killing one of the wretched creatures.

The Longbeards and quarrellers combined to beat and then run down the maneaters but the combat and resultant casualties had left the beards effectively out of the rest of the game (4 dwarfs incl. the BSB remained).

The Ironguts completed their decimation of the other flank by wiping out the quarrellers for the loss of another of their unit. 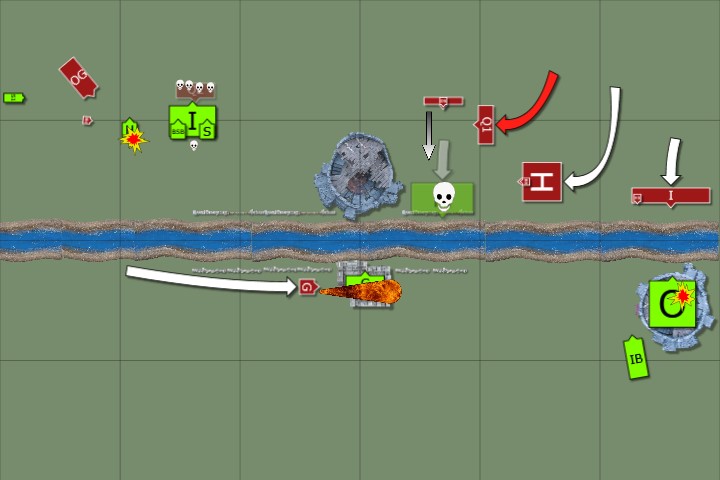 The mop up of the dwarf right flank continued with the remaining sabre and hunter charging the OG. The ironguts failed a swift reform.

For magic (6,2 – no channels), the magic missile onto the remaining quarrellers was dispelled and toothcracker on the hunter went off with the 3rd miscast of the game and the result meaning the slaughtermaster lost the spell.

The combat was a foregone conclusion and the OG was removed. Things were looking very lonely for the engineer on that flank! 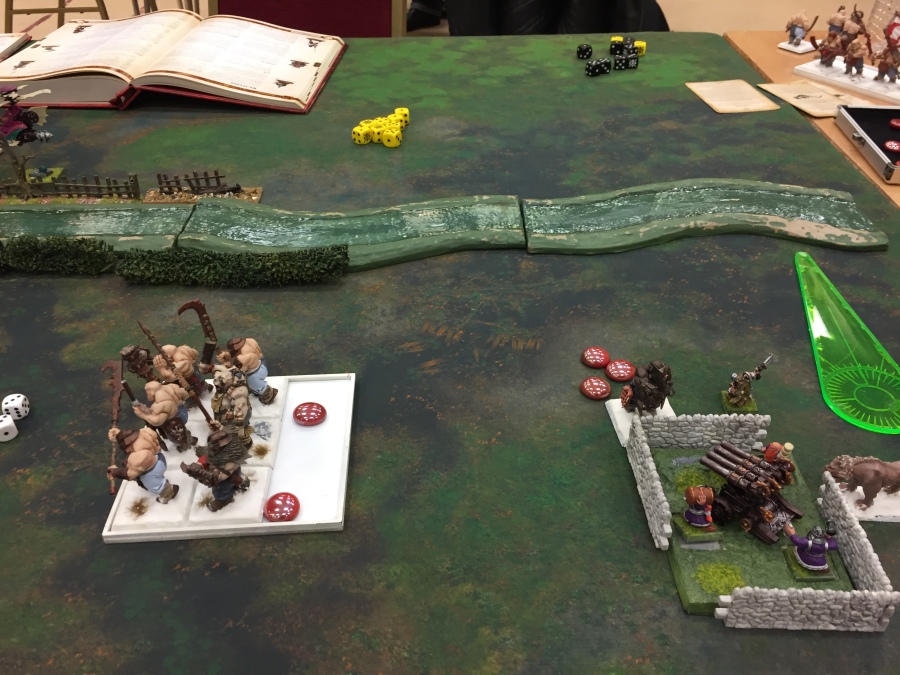 Burrnoth charged the sabretusk determined to avenge the destruction of his beloved machines, the beards moved up to threaten the gnoblers and the irondrakes charged the ogres. The hammerers advanced through the river to secure the nme quadrant.

The gyro once again fired into the building, killing 4 more greenskins but they held from panicking on a snake eyes (much to Stevies joy – hands in the air!). No doubt the ogre masters would need to beat submission back into them later. The irondrakes beat the ogres in combat (even after failing their fear test and dropping to was 1) but again low rolling from Stevie ensured the dwarven assault squad was repulsed. 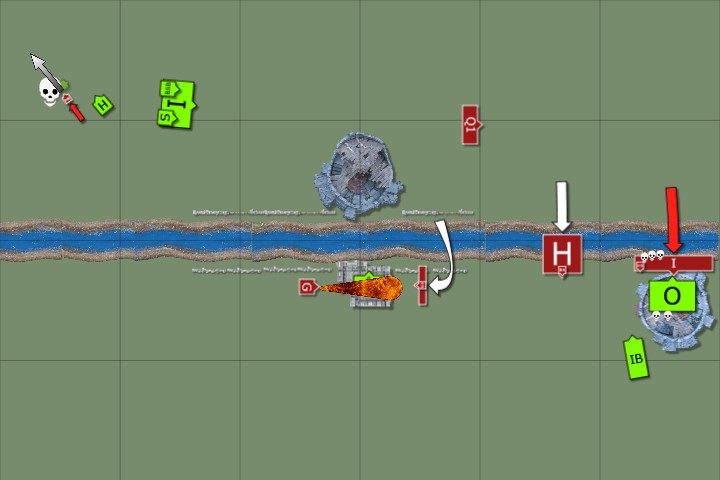 The ironguts marched as fast as possible towards the other dwarf home quadrant. The hunter charged the lonely dwarf engineer and the iron blaster moved to line up a shot on the dwarf general and hammerers.

The slaughtermaster killed off a couple of the quarrellers, taking the unit under fortitude strength (a fact not picked up by either of us at this point). The follow up Maw spell scattered failing to hit anything and the 4th and final miscast of the game wiped away his remaining wizard level and spells.

The iron blaster finally managed something useful, killing off a rank of hammerers (but to Stevies disappointment, not the general who passed the look out sir roll).

As the final act on the right flank, the hunter killed poor Burrnoth.

Due to time constraints (probably due to me faffing around taking notes and photos for this site), this would be the final turn.

The remains of the beards charged the Gnoblers, who chose to flee, thus negating their ability to score. We spoke about this afterwards and Stevie thought the dwarves would have killed and/or routed them anyway.

The hammerers moved fully into the ogre quadrant to secure the points.

The final move was the Firewardens recharging the ogres in the tower. With a point to prove they routed the ogres and in the process secured the dwarf secondary object whilst denying the ogres theirs (it turned out we had both chosen stash the cash in the same terrain piece!)

At the end of the game we both had under control a single nme quadrant, however due to completing the secret mission I had the higher points haul.

This was a thoroughly enjoyable game against a great sport and I would definitely look forward to a rematch.

Would I have changed anything in hindsight? Of course, wouldn’t we all.

Deployment was random but I was pretty happy with it in general. I should have set the war machines up at the back of the field to maximise the time out of combat but in doing so their fields of fire would have been affected. I’m also thinking that next time I roll this scenario they will be the first drop as this is twice they have gone on the flank, as the 2nd to last drop, making it difficult to shield them.

I still need practice in using redirectors (and getting used to a single gyro), the gyro placement prevented the stonehorn charging the warmachines but it with frenzy it could have been led around with some luck (although it was in range of both the BSB and general, so it was not a sure thing). As it was the charge into the slayers was just where I wanted it.

Moving the hammerers into the ogre quadrant could be viewed as having cost me the win, however based on the previous turn, I wasn’t to know the irondrakes would win their combat and if they had lost again, the pushback would have put them in the river and from that position it would be debatable on which quadrant they would count towards. Moving the hammerers ensured the nme quadrant was captured, which represented the most points.

I also considered moving the BSB into the quarreller unit but with the Gnoblers holding the central building for most of the game, I had incorrectly assumed stash the cash was there, so the additional attacks would have helped in the assault and preventing the ogres getting that objective.

So overall a draw was probably the fairest result but I can’t say I’m not also happy with greater points haul.