As discussed in the previous list post, I had a number of things I wanted to achieve with this game: Trying out the terrain table, trying out one of the adapted scenarios and giving Luke an experience of a more gunline orientated Dwarf list.

However, after managing a measly 3 turns each in our previous game we added another item to the list and that was to beat that. How did we do I wonder?

We rolled on the adapted KOW terrain generator that Neil previously put together for that competition and ended up with terrain table 2.  Luke won the roll and became player A for the purpose of the instructions. 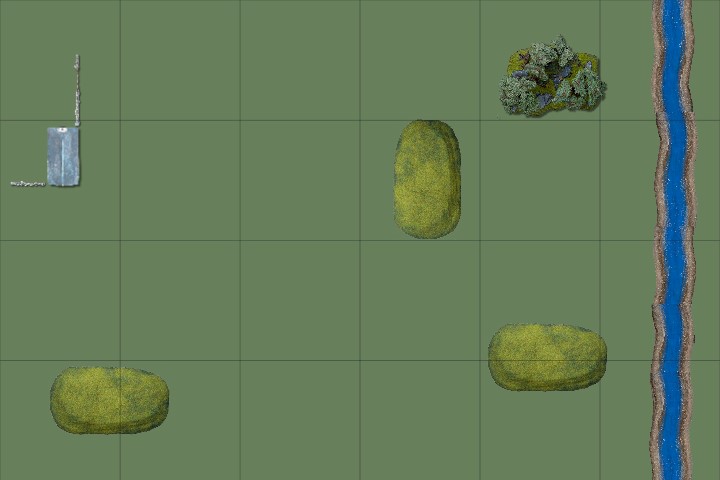 We had a discussion and decided on playing the Loot scenario which was taken from the Kings of War BRB. The adapted rules are below.

Played as per the Blood and Glory rulebook scenario, except:

Dwarf hatred was against all, which I then proceeded to forget A LOT (amateur hour on my behalf).

I laid the first unit but also finished deployment first and despite getting +1 for that and after a number of tied rolls, Luke won the first turn.

(just for a clarity the chaos knights are Marauder horsemen and oldhammer juggernaughts are the Chaos knights).

Luke surprised me by splitting his force between the flanks with nothing in the centre ground. It meant my decoy Longbeards and supporting Gyro were going to take a mauling. The only hope was that being stubborn, they would hold up that flank until the last dwarf and perhaps do some damage in return.

I forgot to take any photos of the Dwarf deployment so took a few during the Daemon first turn. 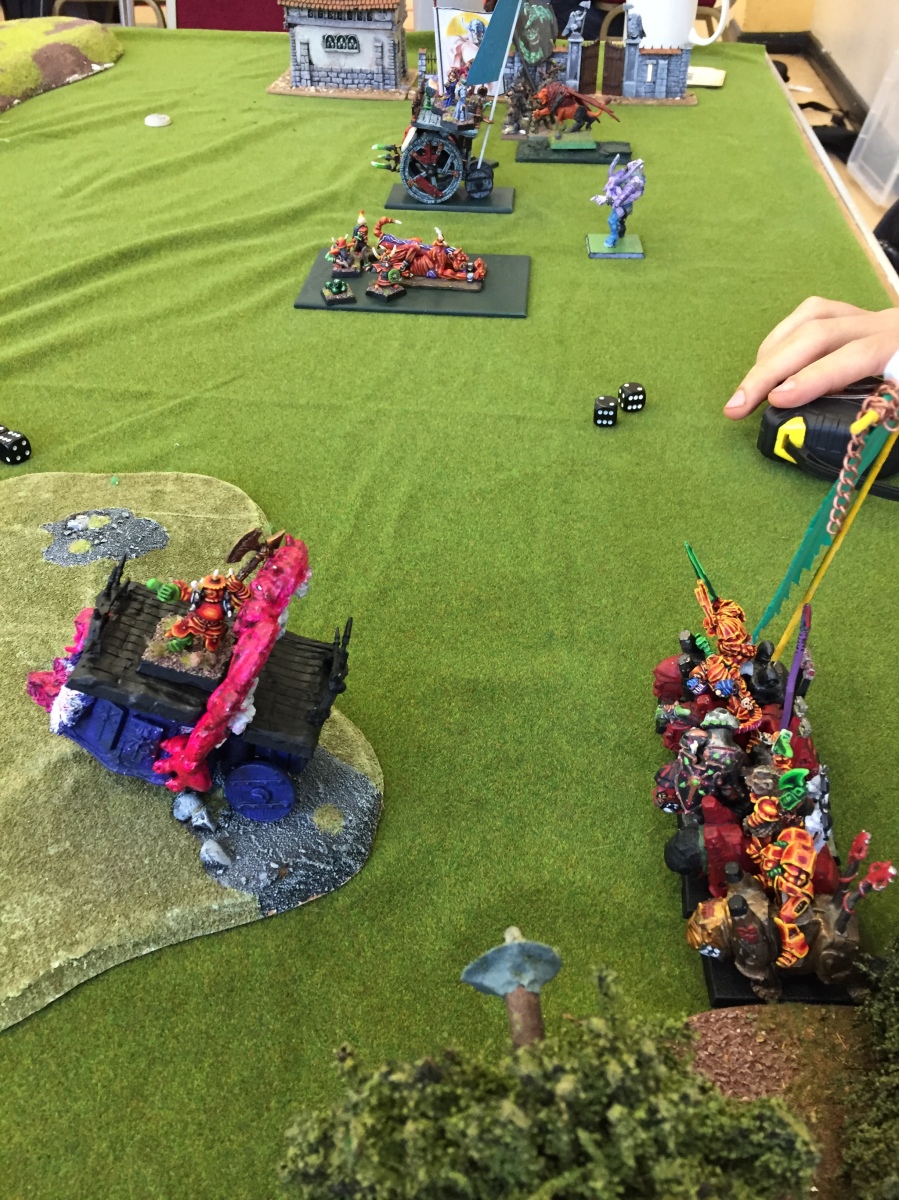 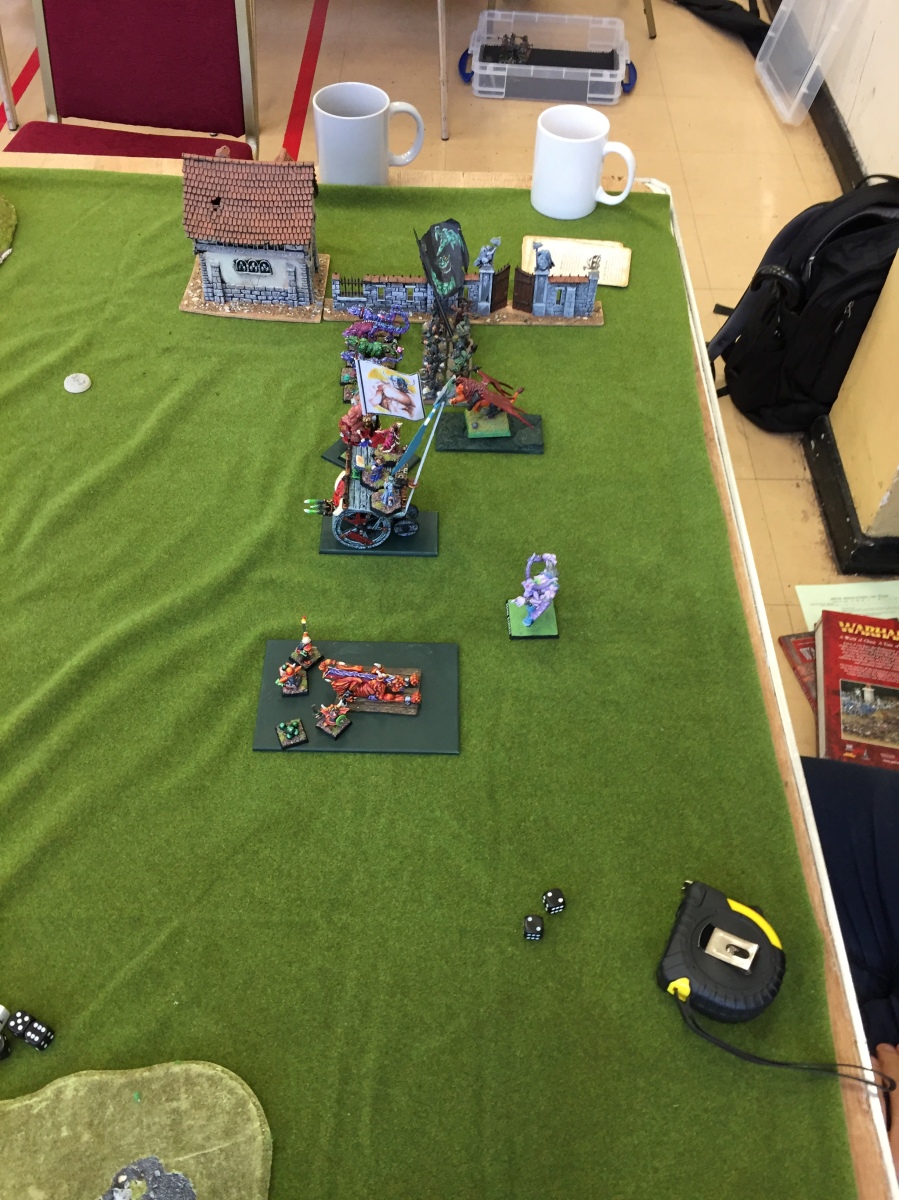 The Daemon right flank surged forward to contest the loot counter on that side from the get-go. Fearing the flaming cannon the Chimera sloped off and bravely hid behind the building.

In an uneventful magic phase, the sorcerer invoked the power of the Skull of Katam, which did nothing bar reduce his leadership by 1. He then threw a fireball into the Longbeards turning two of them into flaming pillars, for a couple of seconds, before they reduced to ash and their charred armour fell to the ground.

The Hell cannon decided to try and add to their misery but it’s shot went wide of the mark. 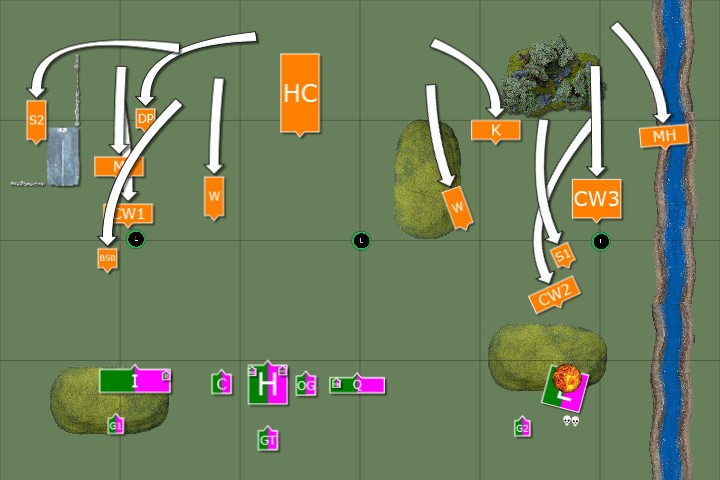 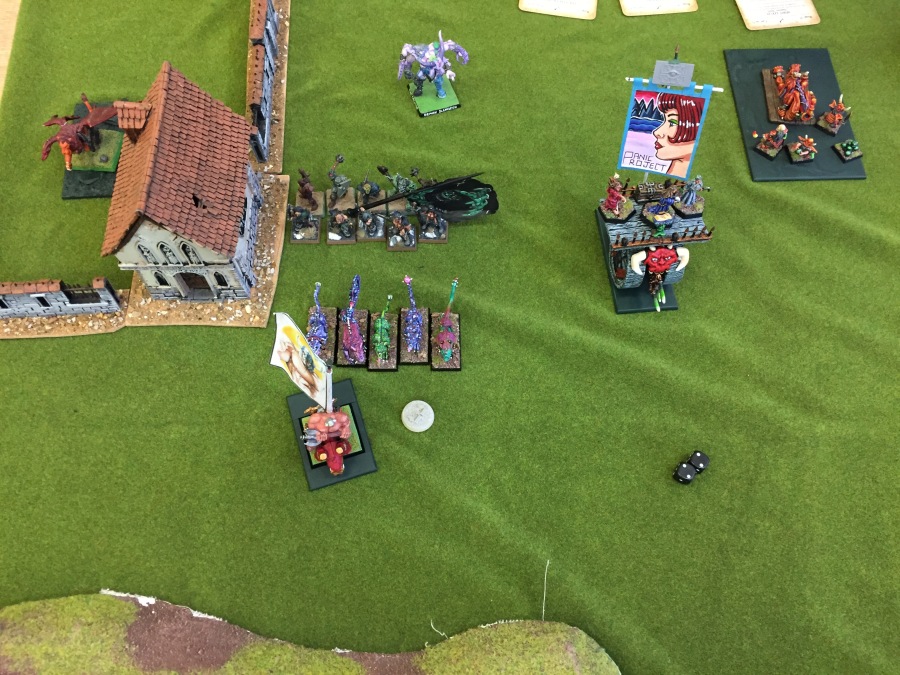 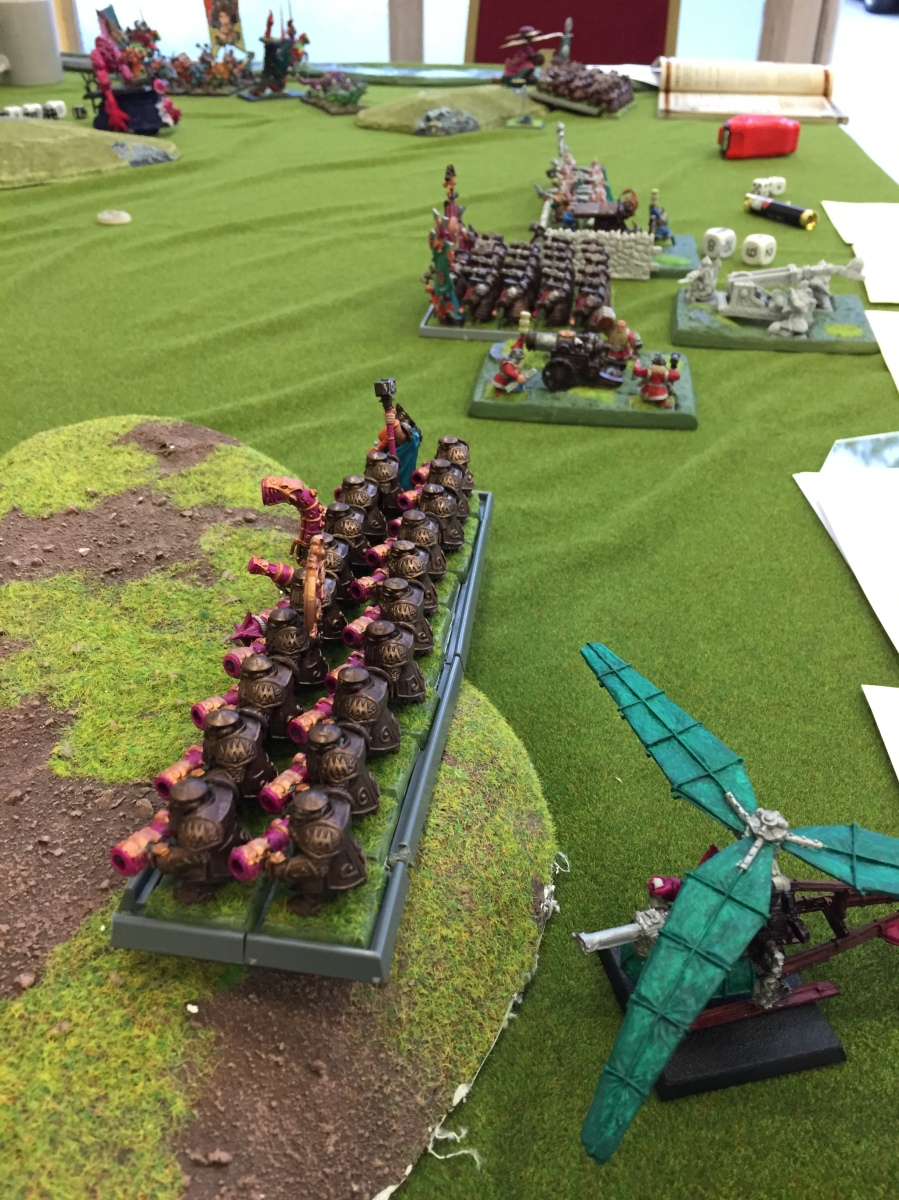 Barlin ordered the Silvergate Guard to fall back slightly to allow the shooters clear line of sight to the ravening hordes.

The gyrocoptors each removed a handful of the chaos hounds, with the surviving hound by the Longbeards failing it’s panic test and running. The quarrellers took off a few of the warriors.

In an unimpressive round of shooting, the Cannon and Grudge Thrower, both failed to wound or damage the Hellcannon. Burnnoth rolled his eyes at the incompetence of the crews and under his direction the Organ Gun hit and damaged the daemon bound into the infernal engine.

Thrud urged his daemonic mount forward and despite the rune of slowness flaring, crashed into the Flamewardens, their defensive shots deflecting off his plate armour.

The Chimera charged at the nearest Gyrocoptor and it chose to flee rather than face the winged beast.

The Warshrine on the other side of the board, likewise charged the Gyrocoptor and it to fled.

The fleeing hound failed to rally and went off the board.

Both the Chaos Warriors and the Marauders picked up the loot tokens on edge side of the battlefield.

The sorcerer again invoked the skull and again did nothing bar lose a point of leadership. 2 down and 6 to go! (at this point, 12 dice had been rolled by the sorcerer with no successful channels. Epic rolling.)

At this point the Daemon Prince decided to get involved. Spirit Leech was scrolled but Soulblight was cast with irresistible force at the Irondrakes. The resultant miscast stripped the Prince of his Charmed shield (meaning he was now a prime target for the Grudge Thrower) and the effect of the spell meant Thrudd was able to kill 2 of the Irondrakes with no damage taken in return.

The Hellcannon, deciding to follow the effectiveness of the dwarves, targeted the Organ gun figuring it was the most dangerous of the artillery. The shot scattered, hit the Grudge Thrower and then failed to wound it. At this point the artillery on both sides had been poor. 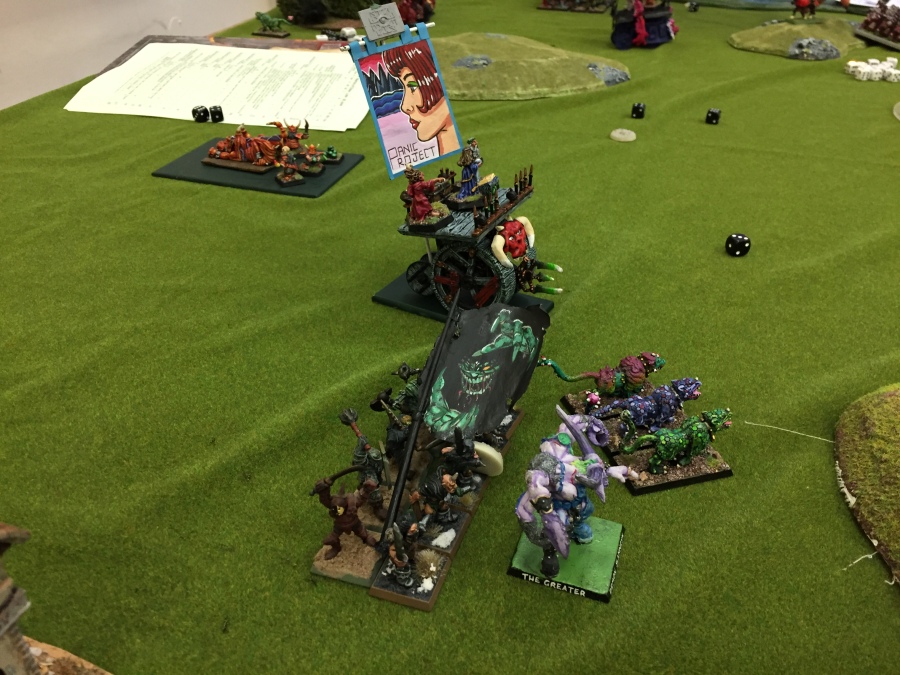 The Gyrocoptor couldn’t take the shame of fleeing near the longbeards and under their stern gaze, turned back towards the fight. The other Gyro didn’t have any such shame and fled the table. (I feel that I ought to mention that the older style gyro has repeatedly under performed for me in nearly every battle. As such a new model has been commissioned to be built and the pilot of the older model has shaved his head, taken the slayer oath and will likely not be seen on the field of battle again!).

The Hammerers, recognising the forces of Chaos were now in a commanding position, marched at speed towards their forces.

The quarrellers also advanced towards the centre loot counter.

Trying to make up for the previous round of combat, the cannon took a few wounds off the Hellcannon. The Organ Gun and Grudge Thrower, both aimed at the Prince, stripping him of 3 wounds (at this point he started to look very concerned sitting as he was on one wound).

With Soulblight still in effect, the Irondrakes continued to lose dwarves but remained resolute.

The Longbeards, wanting to avenge the earlier burning of their kin, charged into the Sorcerer (who was unable to flee). They easily won combat and chose to run him down rather than letting him escape to fight another day. 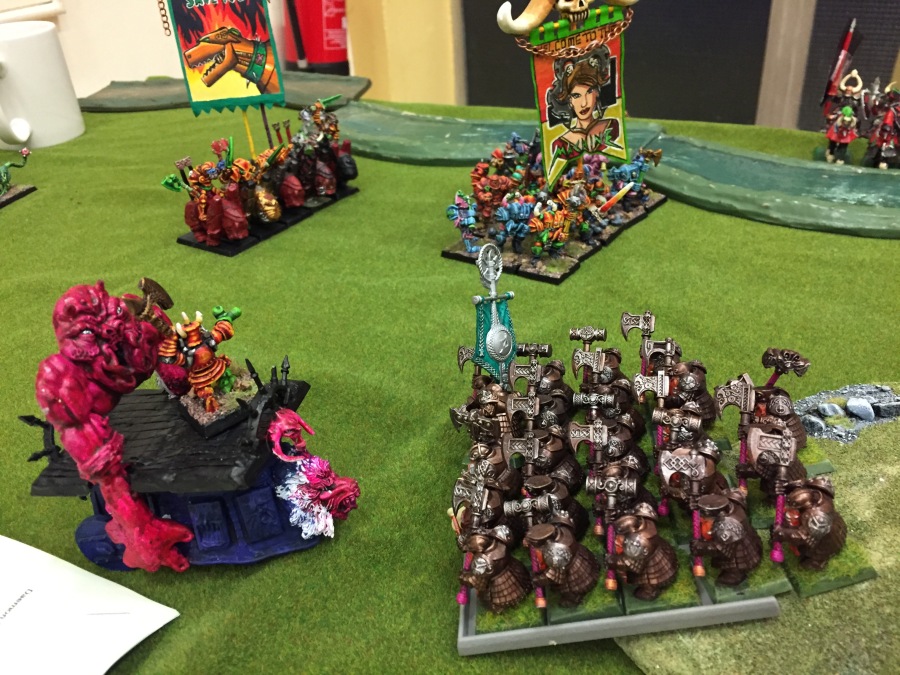 Wanting to escape from the attention of the dwarven artillery, the Prince charged into the Irondrakes and completely whiffed his attacks (though the dwarves followed suit and failed to remove the last wound). The Chimera followed him in between his attention and the thunderstomps, removed 8 of the doughty dwarves. Thrud challenged out the unit champion and cut him down gaining a point of toughness in the process.

Magic was again uneventful with the dwarves dispelling or scrolling everything the Prince or Warshrines tried.

On the other flank, the Chaos Warriors, Knights and Warshrine, all charged the Longbeards. Eight of them died under the onslaught though they killed one knight in return and damaged the shrine.

The Marauder horse charged the remaining Gyro and though the horsemen failed to do anything, one of the horses at least damaged the machine. In return the Gyro’s rotors cut one of the twisted humans in half. 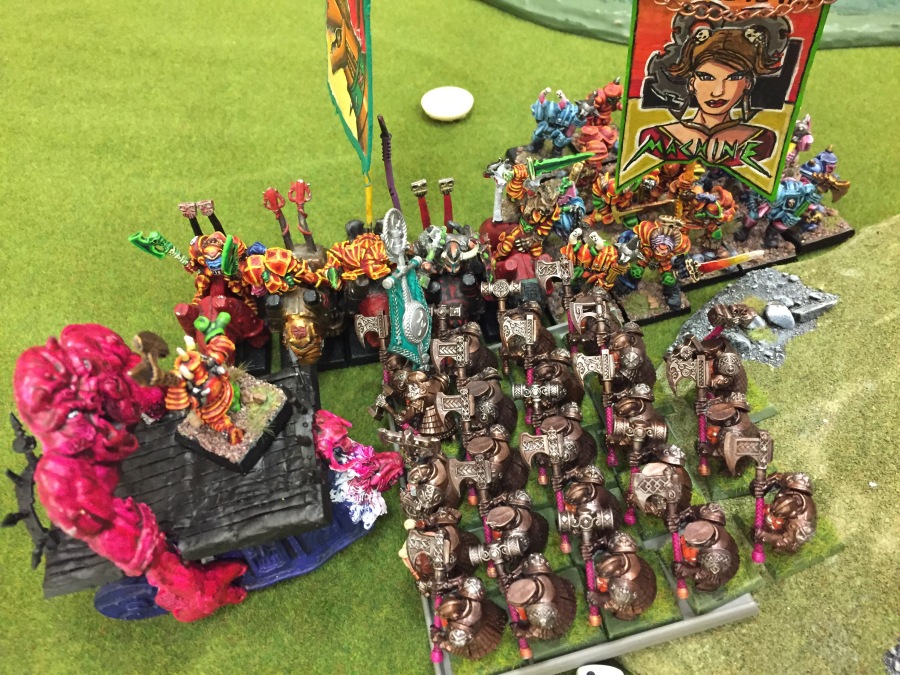 The Hammerers charged the hounds blocking them and swiftly pulverised them.

The Organ gun fired at the nearby Warshrine taking off 3 wounds. The cannon again shot at the Hellcannon, leaving it on a single wound. The Grudge thrower hit the unit of Marauders carrying the loot, taking out half the unit. The nearby Prince and BSB ensured they didn’t run.

The Prince and Chimera finally finished off the Irondrakes but Thrud was unable to kill off the Runesmith so both him and Thrud remained locked in combat.

On the other flank, another 8 Longbeards fell under the triple attack but in return they destroyed the warshrine. The final Gyro failed its break test and fled the table with the horsemen unable to catch it. 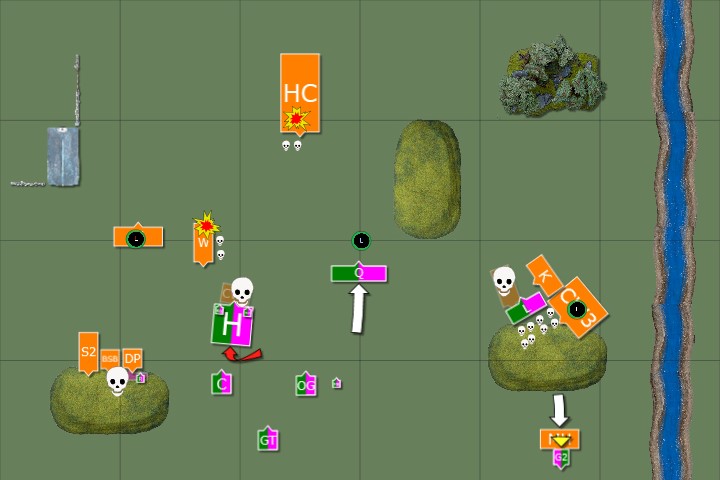 With time rapidly running out, we decided to power on and play a final turn each. The Hellcannon attempted to charge the quarrellers but failed. In his next move, Luke managed to get the Marauder foot carrying the loot into the nearby building and with no way of getting to them and with agreeing that the Longbeards should just be removed, then Luke would have won 2 -1 on loot, so we called it. (In my turn, the quarrellers would have picked up the central loot counter). 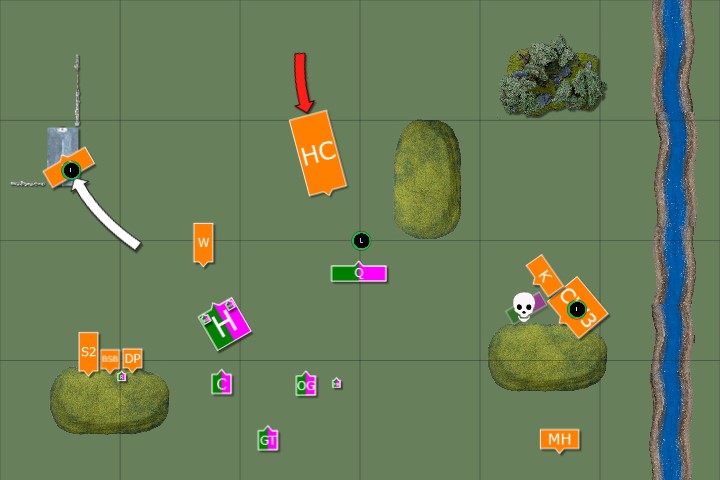 It was 2-1 in the Warriors favour.

Thinking about it, I shouldn’t have called it. The cannon could have shot at the building and with D6 str 10 hits, rerolling wounds due to flaming, there was a good chance that the marauder unit would have died (or run) thus dropping their loot token meaning the game would have ended a draw. Nevermind.

So how did the scenario play. Both of us really enjoyed it. It definitely gets you thinking in a different way. The half movement when carrying the loot is a great touch and definitely messes with plans. Overall it worked really well and we felt very little had to be changed (bar some clarity on early game capturing of the tokens, as I had nothing about scouts in it. Note – the scenario rules in the beginning of this report incorporate the changes made).

The Terrain table also worked well and we were both happy with this too.

In terms of the army, the Gromril armour/GW loadout on the Runesmith was excellent. I definitely want to try that out again, perhaps on a thane. The Grudgethrower was OK. It wasn’t probably the best army to try it out against and one outing isn’t enough to make any kind of judgement. The Irondrakes are becoming a bit predictable so if I take dwarves again, I will definitely use something else, perhaps rangers and maybe some miners. I also need to commit the hammerers a lot earlier as again they didn’t do anything (bar give anything stubborn).