So with the army choice made, it just remained to pick the style of army and troops to sally forth and strike out the grudges.

So this opens up a dilemma. Do I run a complete strollaz list or even a full infantry list with no strollaz (as this would effectively free up the points for another infantry block).

This is tempting, if only because in this type of list I can justify using my favoured Lord on shieldbearers. I also love big blocks of troops. It embodies what the game is to me. Finally no one expects the strollaz list. However as it is an open list comp, the shock factor will be taken out of the equation.

So with this in mind the sensible option will have to be the ‘Monty Mash’ hybrid gunline. As such my list is below and i’ll follow that with an explanation for the choices (because lets be honest it would have chopped and changed a dozen times before posting).

(Edit: List has been updated as it turns out each rune counts as a warmachine upgrade option)

The throng of Karak Silvertop 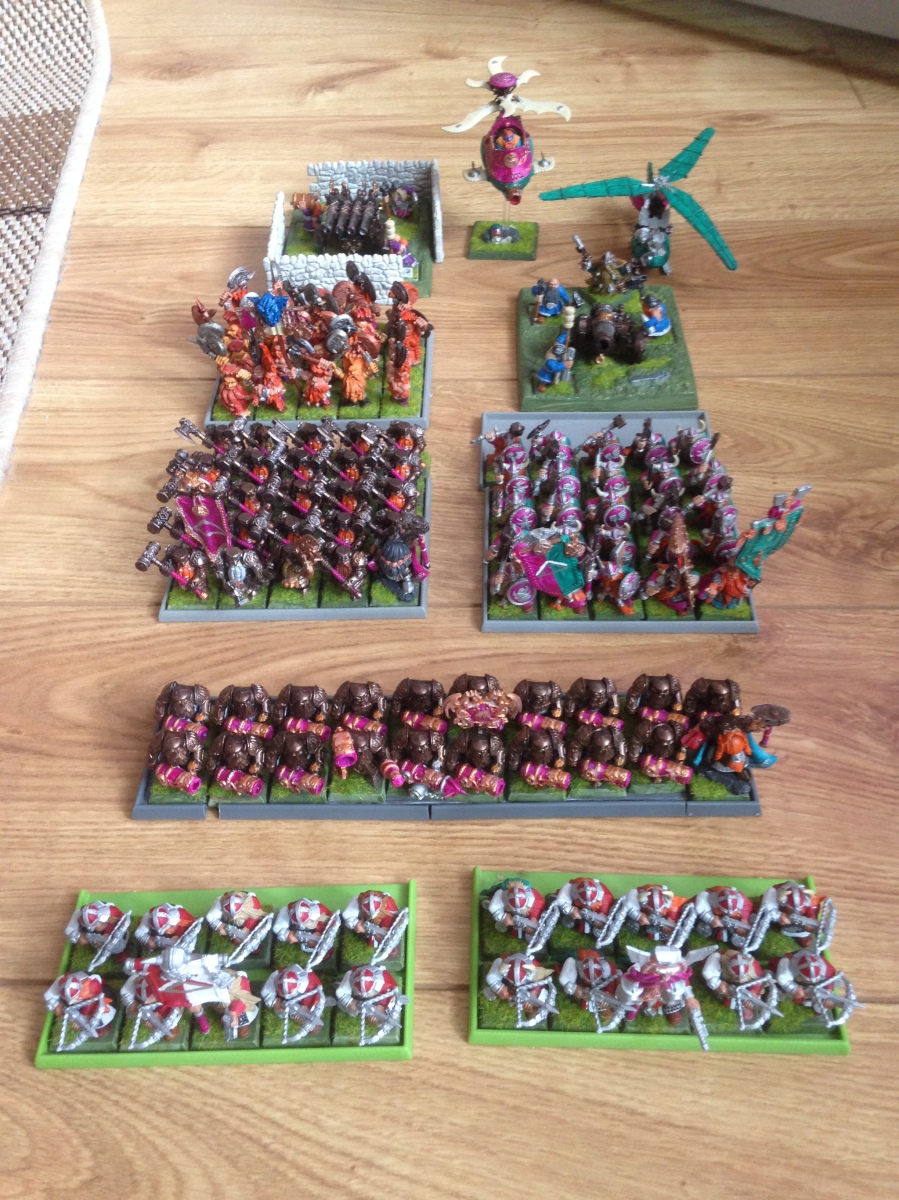 With no strollaz, this really only leaves the same old holy trinity as the first choice:

The Thane has a 3+, 4++ save and a 6″, 5++ ward bubble vs shooting. He will likely be deployed with the Shield beards with the bubble covering either a warmachine or slayers.

Both Runesmiths have a 2+ save, with the general also having a 2++ vs fire based attacks and a magic weapon in case his units come across ethereal units. The general will go with the hammerers and the other runesmith will likely go with the iron drakes or perhaps the shield beards.

With the cap on double ‘rare slots’, An unruned organ gun is my preferred choice if only to deal with any banner of the world dragon units. As such an ME is an essential option to boost accuracy and re-roll any misfires. He can also act as a back field protector with a 3+ save and the brace of pistols giving him 3 AP S5 attacks on the charge. The ME will count as 1 of the 5 warmachines allowed

Unlike a lot of army books I feel the dwarf book has no bad core choices and plenty of good ones. I’ve used 40 strong quarreller great weapons, 30 shield beards, GW troops, Thunderers, combo’s of all. As such this gave me one of the hardest decisions to make.

Although I almost went with the block of quarrellers, I ended up going a block of shield beards to act as an anvil and 2 small units of quarrellers. These would be used in conjunction with the hammerers and that units 12″ stubborn bubble, either as road blocks or as flank chargers. Having never used msu quarreller units this would give me something to try and not cock up during the comp…

My only question is whether I should have used GW beards and 2 units of thunderers (or one quarrellers, one thunderers) but the additional cost involved with GW’s and reduced range of thunderers swung the choice.

For most books this section contains most of the fun stuff. With dwarves I find this is less so if only because every section has great options You could argue that Dwarf specials are limited as 50% of the options are warmachines.

Of these, a cannon for me is auto include if only to take out large powerful targets (mounted characters etc). Forging is essential to mitigate misfires and I like to add burning to remove regen. (This counts as 2 of the 5 warmachine slots – 1 for the cannon – 1 for the runes. With the ME character total is 3 of 5)

At least one gyrocoptor is also auto include. My preference is to have 2 and I hunt them in packs. Restrictions means that I have decided to go with one (this brings it to 4 of 5 warmachine slots taken).

Troop choices will be normally be between hammerers or ironbreakers as an auto include. Both are great units, iron breakers are the much vaunted ‘best anvil unit in the game’ but they cost the same points as hammerers and with huge number of high strength attacks in this edition, 3+ standard save and 5++ parry save for me isn’t good enough. Hammerers however are by far our best offensive unit with str 6 and 2 attacks. Couple that with a 75 point runic standard allowance and the ability for any dwarf in the unit to answer a challenge if the general is bunkered there. With not enough points for decent units of both, there is just no comparison and hammerers are in.

A note on their banner. I do like including the MRo Valaya in order to ensure my dispelling is matching any level 4 cast, however with 2 * 2 Ro spellbreaking to mitigate magic, taking MRo Groth One Eye will give a 12″ stubborn bubble. Combined with Hammerers own stubborn, it will anchor this section of my lines.

My next choice isn’t considered that competitive. Darts of slayers you can often find but I don’t hold truck with that kind of play. If someone wants to, fine but i’ll just move onto a different opponent and won’t be coming to call again. A block of 20 slayers is reasonably cheap, can chose to use 2 hand weapons or GW each turn and are unbreakable/immune to psychology. Couple this with their ability to cause a deathblow and always wound on a 4+, they could definitely cause some mischief. They are vulnerable to shooting so will have to stay close to the BSB bubble. However the main reason I am taking them is because I love the models and the fluff.

The ideal scenario would be to take 2 organ guns, one runed one not. In all my games they have been deadly, utterly decimating units. With the cap on rare choices (no doubles) and the warmachine cap, I’ve taken just one (unruned) to pair with the ME (taking the warmachine slots to 5 of 5).

The final choice for me is a unit of Irondrakes. For me they are the best new unit of the army book and are an almost auto include in any of my armies. They combine the best of a unit of thunderers crossed with ironbreakers. 20 quick to fire, str 5 AP flaming ranged attacks are fantastic. Throw in 2 drake pistols on the champion so you can always stand and fire and the rune of slowness to try and ensure another round of shooting with no stand and shoot penalty and you won’t find anything more deadly on a unit of troops. But wait is doesn’t finish there. They have the same elite stats as longbeards and ironbreakers and wear flame forged gromril armour. This gives a standard 4+ save, a 2++ ward against fire based attacks and a standard ward save of 6++ (With a runesmith in the unit they get a MR 5++), making them an anvil unit that in my eyes surpasses ironbreakers. If they could be said to have a drawback, that is that the drakegun only has an 18″ range.

5 thoughts on “Creation of the Throng”