On Friday I had the 2nd of my games in the Kroak league. Alex was rocking the cold blooded Lizards.

His list can be found here: Scissor, paper, stone, Lizard. I subsequently found out that anyone who made it to the semi-finals last year, had their Lord/Hero points allowance capped at 25% rather than 50%. This would impact: Alex, Steve M and I think Neil (will need to check that). Last year’s winner (Marc) is not taking part in the 2016 comp.

A recap of my list is here: Creation of the Throng

As normal i’ll caveat that this is as accurate as I remember, any errors are down to notes/memory and lack of ability with battle chronicler.

Our independent ajudicator (Cormac), rolled battleline. Played as per the rule book but you must win by 200vps to gain a victory.

Alex had to get a fortitude bearing unit off the table, whilst I decided to ‘cut off the head’ (kill his general in h2h)

Dwarf hatred was (again) just against the nme General.

The Slann was a lore master so knew all the signature spells by default.

The beardling had been in shock when he reached the gates of Karak Silvertop, the rune of an apprentice brewer half hidden under the blood on his tunic. The gate guard had listened as he recounted his wild tale of Lizardmen in the valley and the slaughter of the Brewers. Skrags Beard was no Bugman xxxxx but it was the Karaks primary brew and runners were quickly dispatched to verify the truth. Upon their return, their ashen faces told the story, their words confirming the desecration of the brewery. Insensed, King Knoffles ordered that it be added to the holds book of grudges and sent Barlin to summon the Throng and exact vengeance in the form of the head of the Slann. The filthy Lizards would pay for their trespass!

Cormac chose the North side of the table for Alex to deploy, with the brew house in the middle of his lines, purely for ease as they were already sitting there. You can’t argue with that kind of sensible thinking and with so little scenery it didn’t make much difference.

Unit setup was alternated between us and after placing skink scouts and vanguarding the terradons, the dwarves won the roll and elected to take the first turn.

The throng exited the underway, immediately forming ranks in the expected disciplined manner. Two large units of lizards could be seen opposite, the horned monstrosity next to them appeared to have been rummaging in the remains of the brewery. Again they desecrate our land thought Barlin. He forced his anger back looking over at Burrnoth and took comfort as the engineer directed the cannon to fire at the creature. It let out a roar as part of it’s carapace was ripped away but it didn’t appear to be noticeably slowed. On the other flank the quarrellers fired on the terradons, downing one of the creatures. Burrnoth then turned the attention of Little Betty to the remainder and fired all barrels of the organ gun with a double load of shot leaving nothing but scraps of flesh, bone and one scrap of wing fluttering in the breeze.

The lizards responded to the dwarf opening salvo by surging across the field. The Slann held up a strangely carved rod, broke it and visibly glowed with eldritch power. Magic missiles flew across the intervening ground into several dwarf units but failed to cause any casualties.  A hoarfrost started to form on the cannon but dissipated as Harek invoked the runes on his staff.

The 2 units of skinks that had flanked the Acropolis fired a hail of poisoned darts from their blowpipes and bought down the advancing Gyrocoptor. A previously unseen number of skinks appeared next to the quarrellers, also firing blowpipes and took down a few of their number. 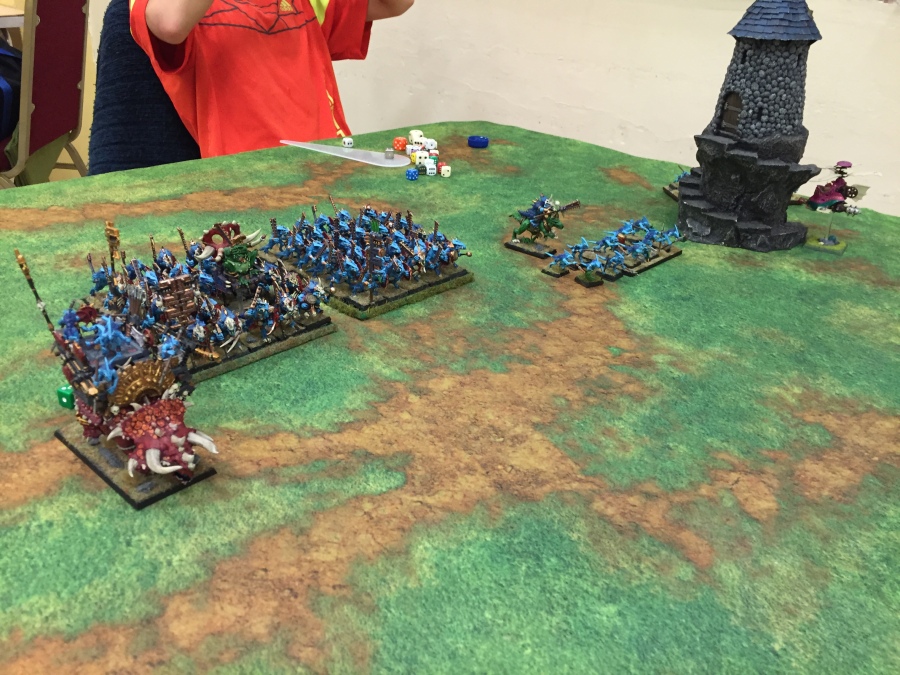 Following standard drill, the bulk of the throng maintained their positions, the exception being the Firewardens who, under Harek’s guidance, advanced to get their drake guns in range. They immediately sprayed the temple guard in fire, incinerating a full rank. Burrnoth directed both sets of artillery to fire at the Stegadon and he nodded in satisfaction as the great beast crashed to the ground with gaping holes in its flanks, the mounted howdah smashed into kindling. The quarrellers opened up on the skink cohort and salamander pack respectively. The skink cohort losing just 1 of their number whereas the salamander was visibly injured with a profusion of bolts having pierced it and most of the handlers were also slain. 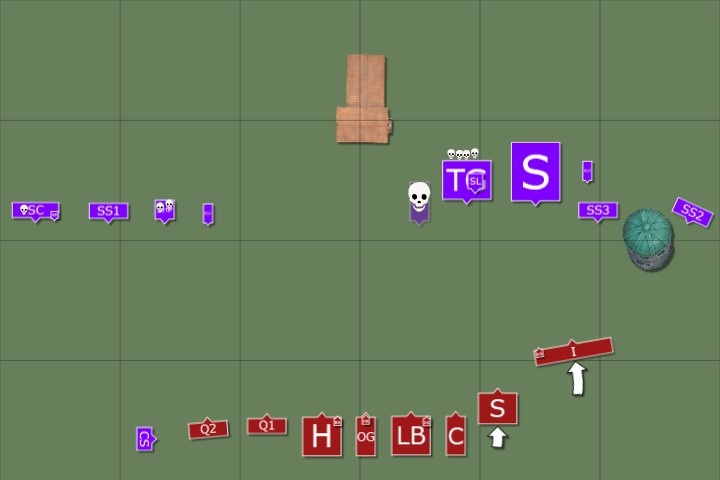 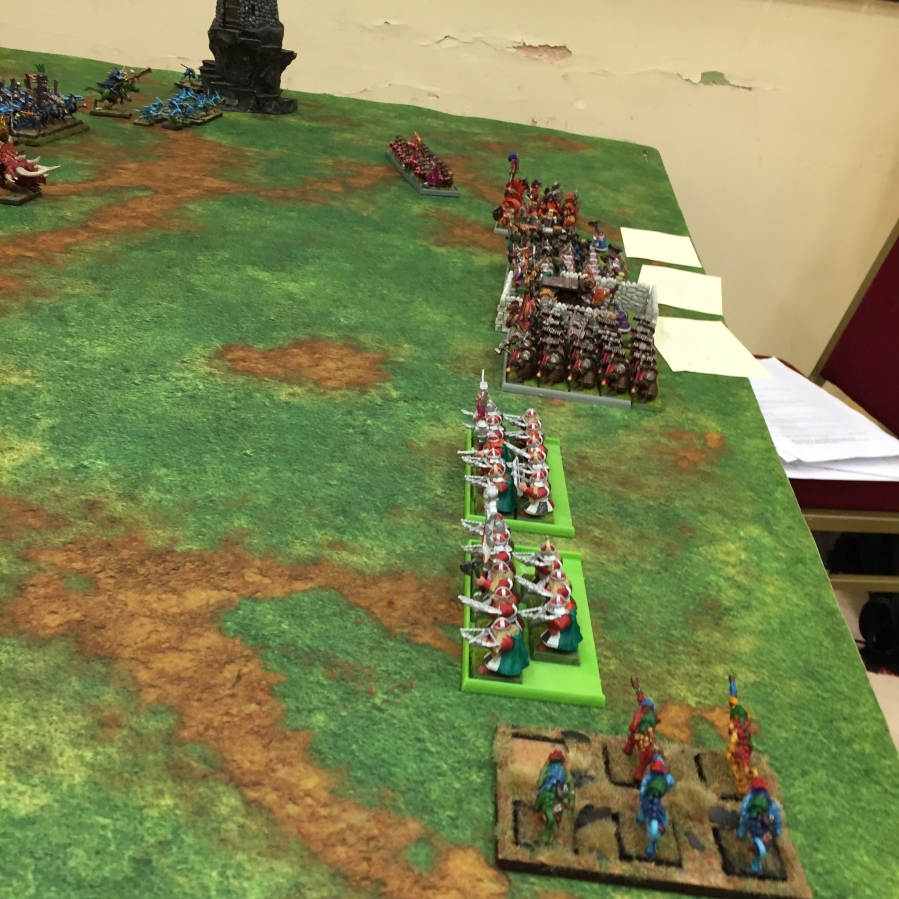 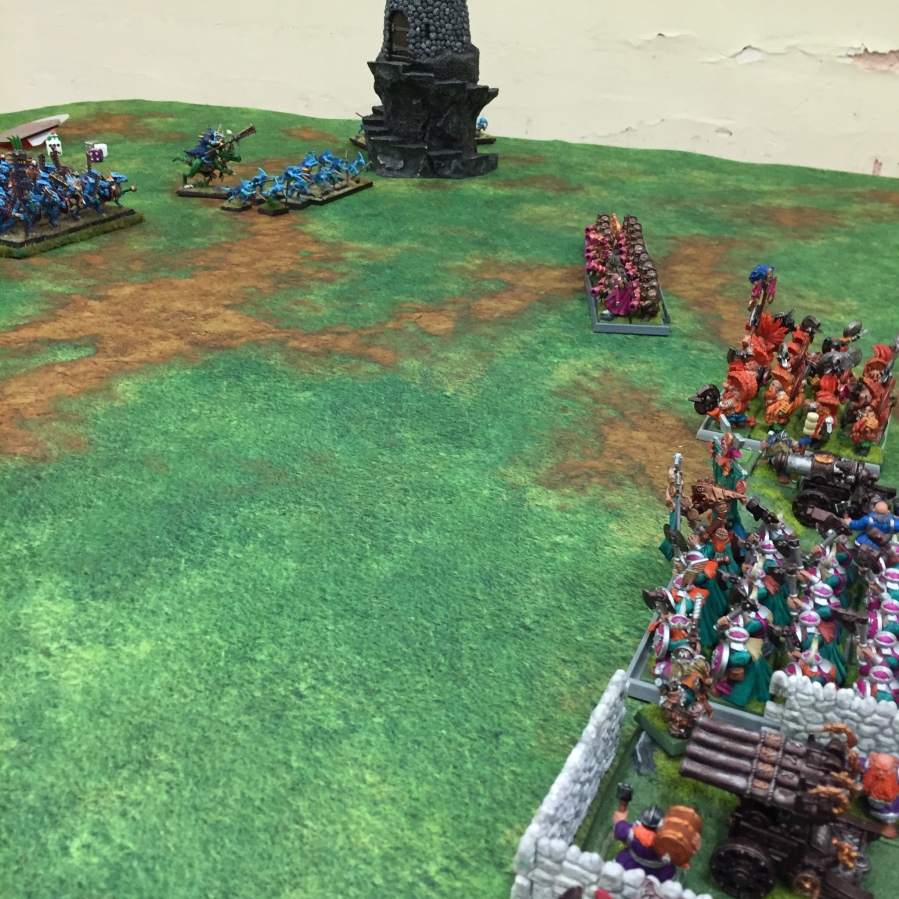 The quarrellers on the far flank continued to take the brunt of the skink fire, 4 more of their number dropping from the poisoned shots. The salamander started to expel fire but hiccuped and burnt it’s final handler to death. It started to feast on the blackened body, jealously guarding its feed for the remainder of the battle. Magic missiles once again hit the dwarf lines but again they were shrugged off. Barek felt 2 other spells cast. He saw the flesh regenerate on the unit of temple guard but concentrated his efforts on dispelling the 2nd spell. He was distracted by a mounted lizard crashing into the quarrellers next to him and ground his teeth in impotence as the workings of the organ gun iced over. Burrnoths glaze and raised eyebrow were nearly enough for him to contemplate shaving his head but he reminded himself it was no manling wizard he faced but something infinitely more powerful. 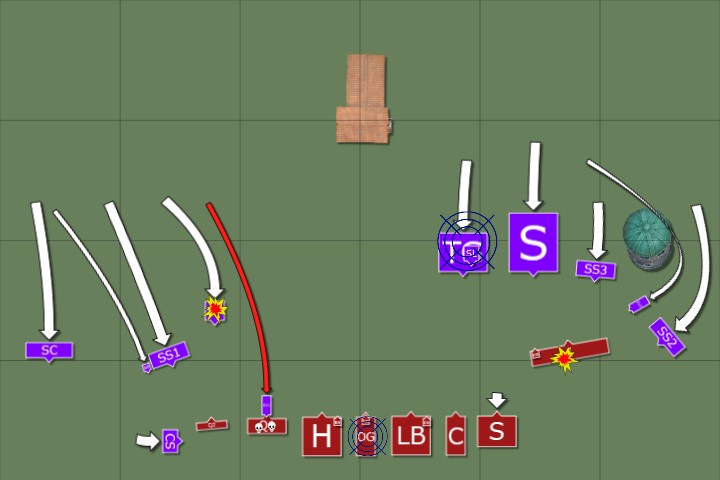 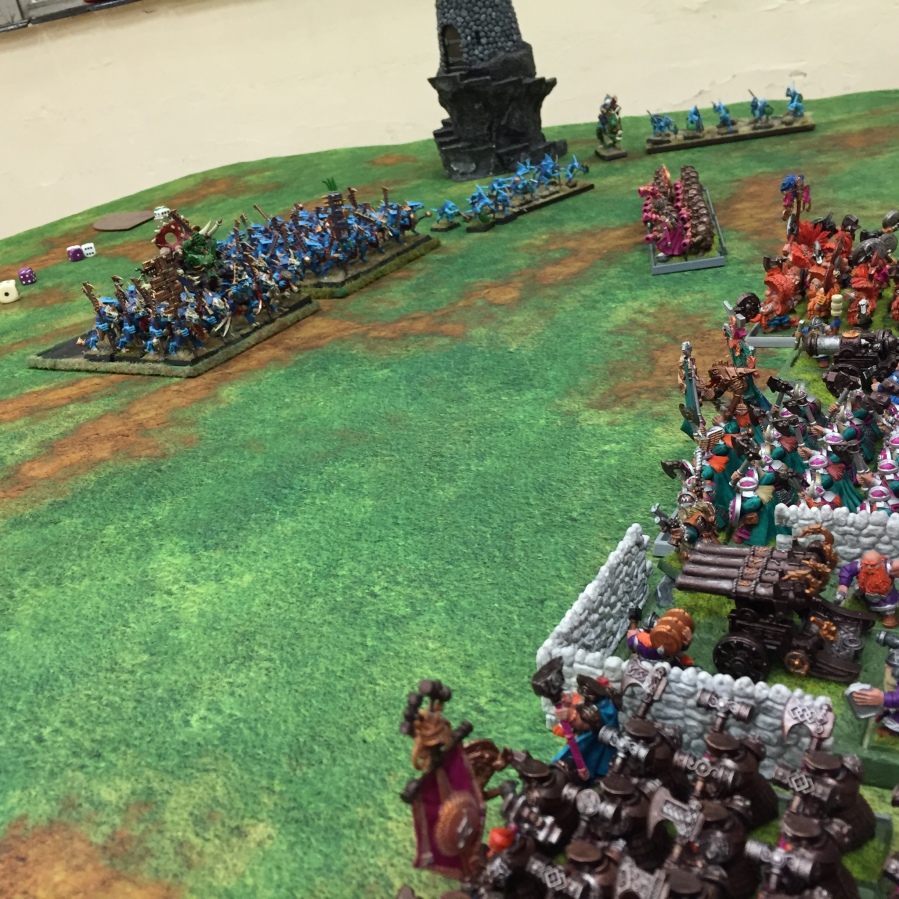 Barlin recognised that this was the start of a pivotal moment of the battle and ordered his forces to advance. The 2nd unit of quarrellers charged into the flank of the mounted lizard, in order to assist their brethern. Their help was ineffective with the Scar and his mount hacking down 5 of their number, but under the steely gaze of Barlin and the banner of the Silvergate guard, they held their ground. Harek ordered the Firewardens to retreat slightly in order to maintain the line. This they did in lockstep again spraying the temple guard with fire incinerating another rank. The cleansing flame preventing any regeneration of the wounds. The artillery fire was ineffective, managing a single death apiece. Only through Burrnoth’s attentions did Little Betty not blow up and he set the crew to melting the ice that had caused the misfire. 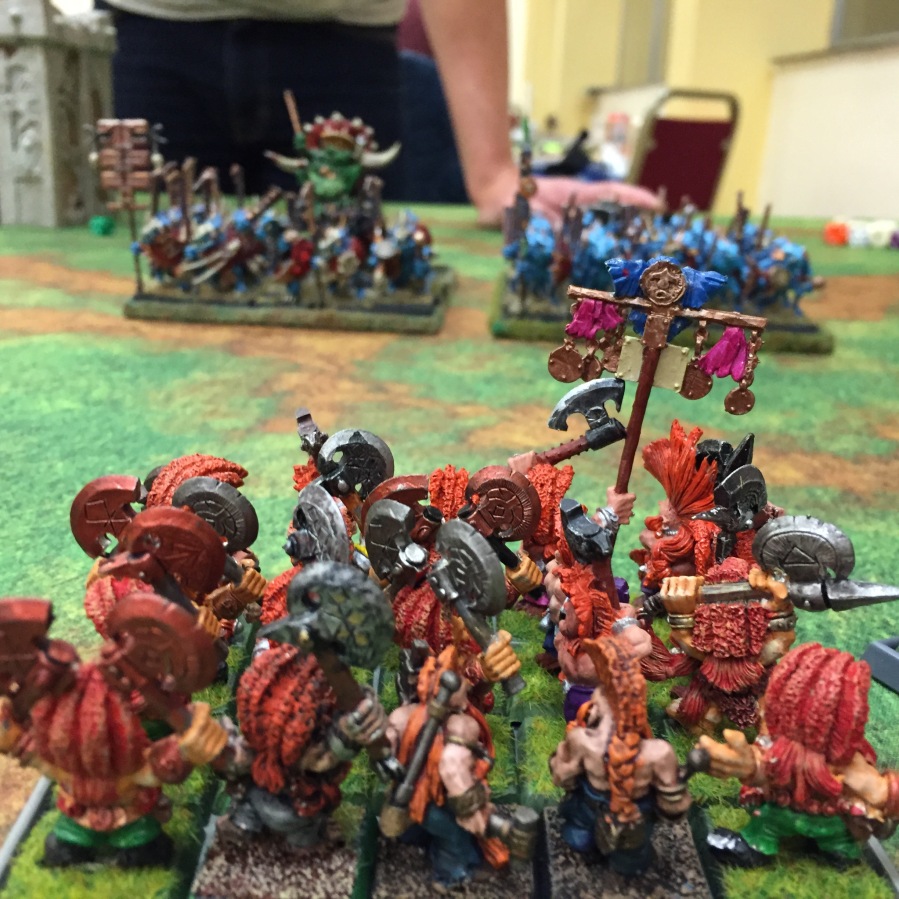 The smaller lizards swarmed around the dwarf lines. The brotherhood of doom lost a rank to the poisoned darts, their shame wiped clean with their deaths. The camouflaged skinks reappeared next to Little Betty mowing down the crew, much to Burrnoth’s outrage. The Firewardens hunkered down as they received a charge from the other mounted lizard. Barlin narrowed his eyes as the 2 large blocks of lizards retreated from his forces, wondering what kind of cowardly shenanigans he was witnessing.

The Silvergate guard and old grumbers continued their advance against the rapidly retreating lizard blocks. The brotherhood lost all restraint and charged one of the skink units who promptly fled. The Flamewardens took heavy casualties from one of the mounted lizards, whilst the other finished cutting down one unit of the quarrellers. The other unit steeled themselves knowing that their sacrifice would hold up the killing machine scything though their ranks. The Cannon crew fired at the templeguard and stood stunned as the Slann general exploded into red mist after the cannon ball impacted with its body. Barlin tugged his beard in annoyance, “Knoffles will have to do without the head nailed to the wall in his trophy room”, he thought.

The smaller lizards continued to flit around the dwarf units, raining darts into units, several brave dwarves falling to the deadly poison. A thunderclap struck the small skink priest, knocking it to the ground. It climbed back to it’s feet swaying slightly but with no other injuries showing. The muscles swelled and scales grew on the mounted Lizard near it and it roared as it finished cutting down the last of the quarreller unit. The two large units of lizards continued their retreat. 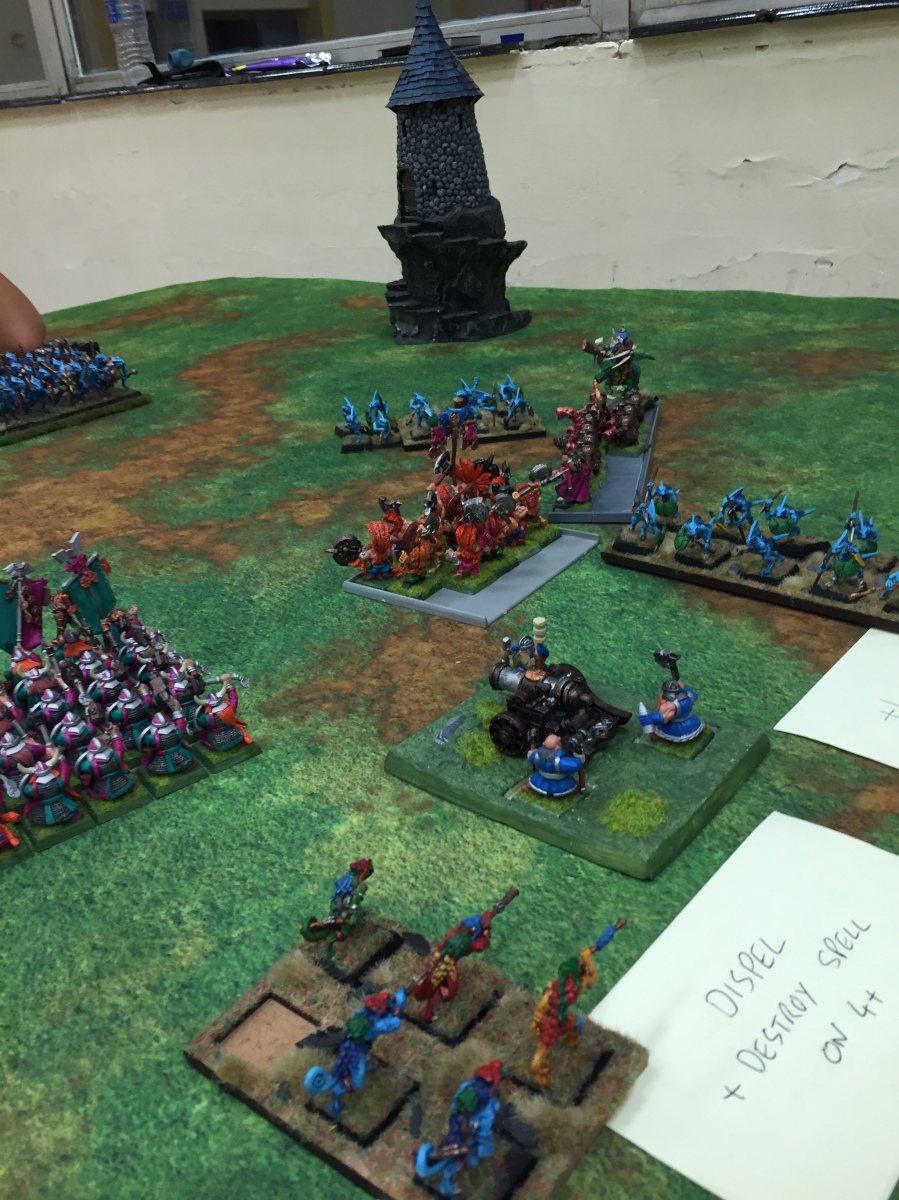 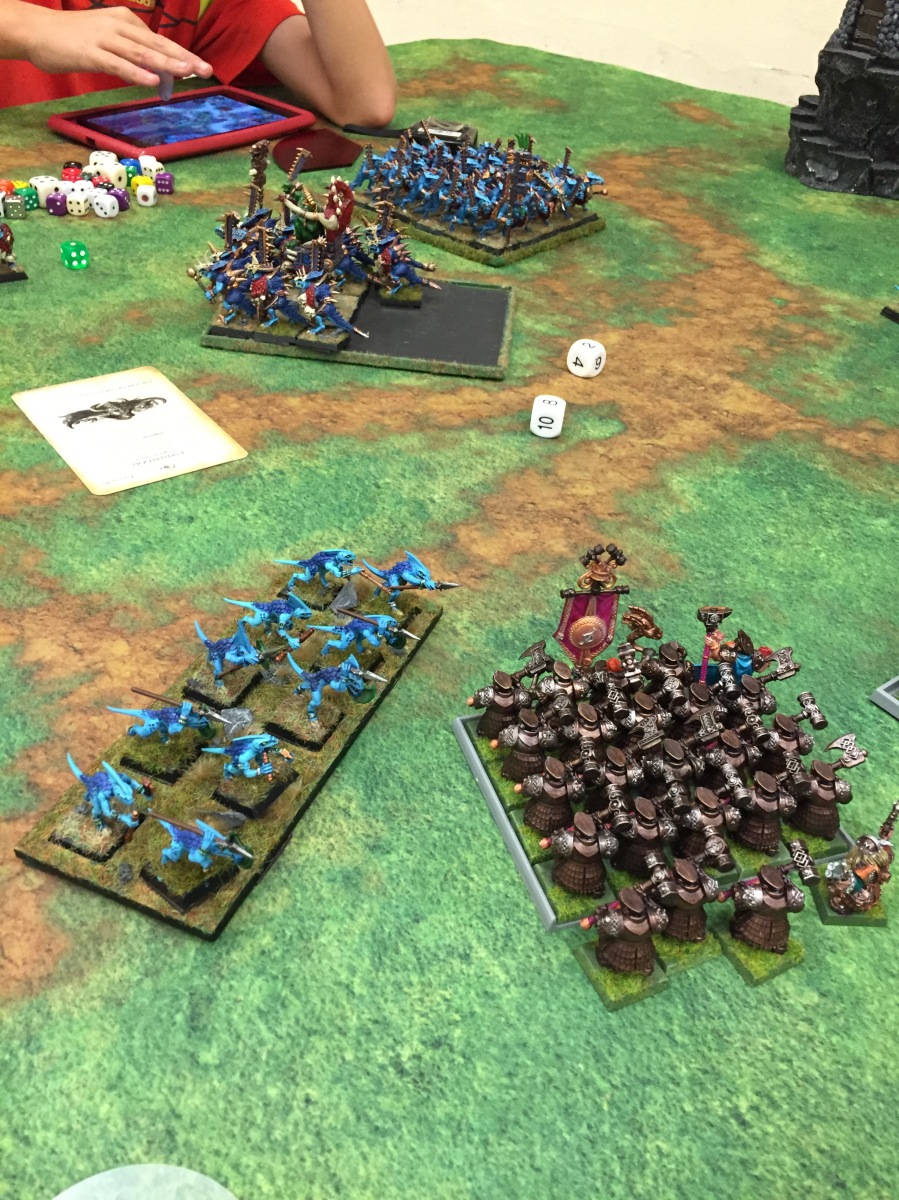 With a wild shout, the brotherhood charged the skink unit again, laughing with glee as they ripped them apart. The silvergate guard also charged the nearest skink unit who predictably fled. “This opponent has no honor” grumbled Barlin. The Cannon wheeled round determined to avenge the death of Little Betty’s crew and one grapeshot later and the chameleon skinks were obliterated. 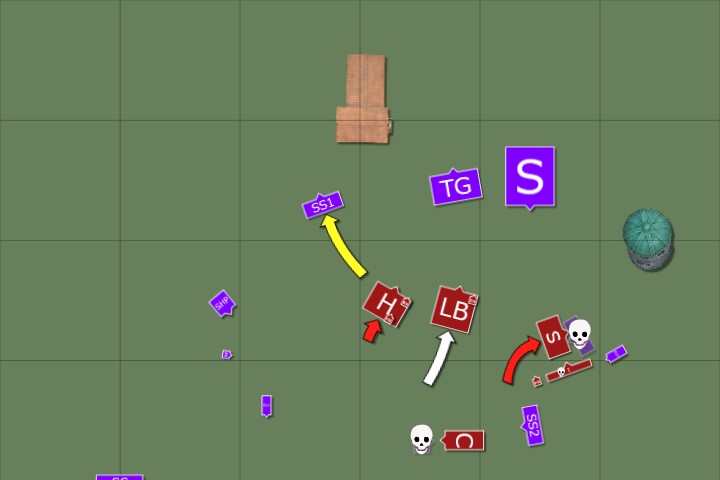 The blocks of saurus continued their headlong retreat with the skinks skirishers next to them running headlong for the horizon, shedding their weapons as they ran. Barlin could only watch as Harek called out a challenge to the mounted Lizard and was brutally cut down. The crew of the cannon took cover behind the machine as it was peppered with dart shots. 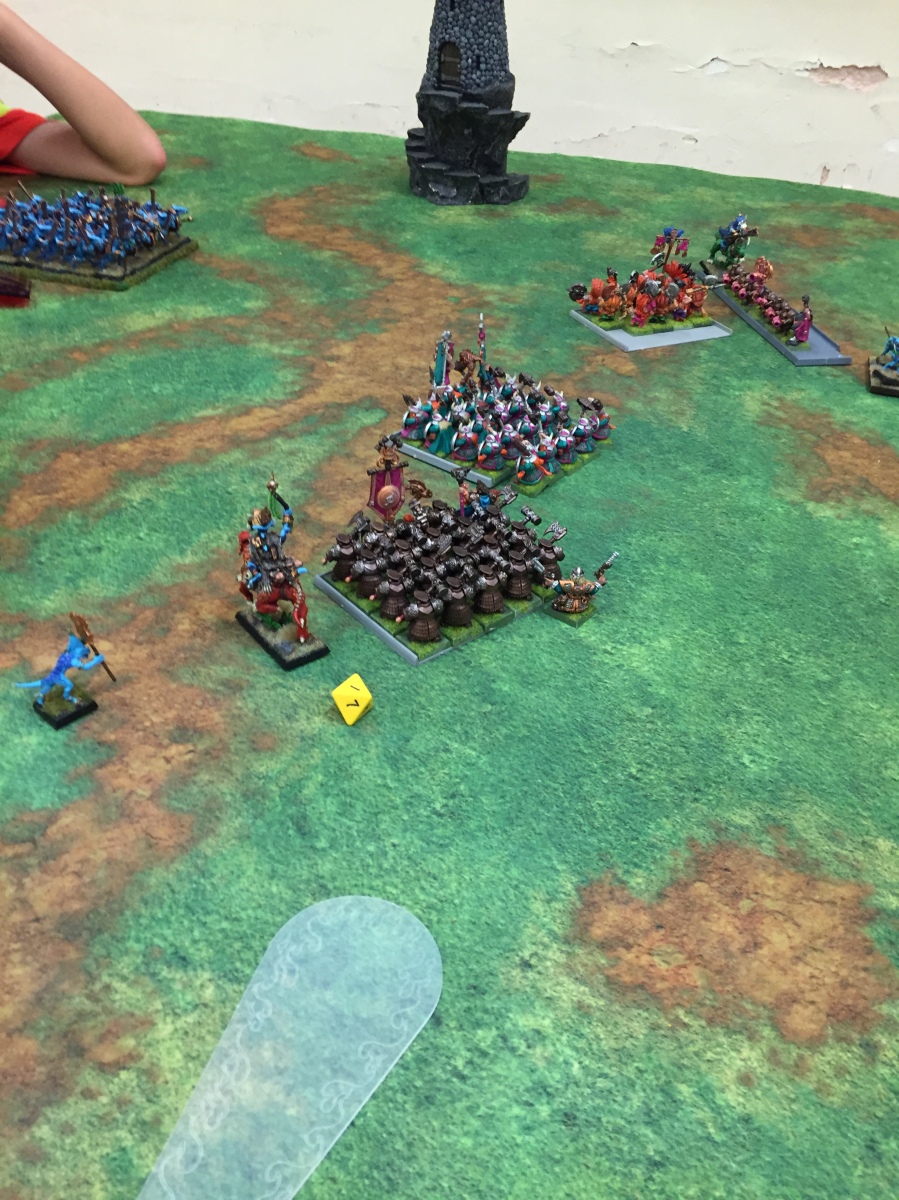 Burrnoth spied the skink priest out in the open and moved out of the back of the Silvergate guard unit and coolly dropped it with two well placed pistol shots to the head. The cannon crew determined to emulate their previous success, wheeled the machine 180 degrees and again fired grapeshot at skinks but were disappointed as just over half the unit remained once the smoke had cleared.

Burrnoth turned in time to see the final crew member of the cannon slain. “Lizard Bane” he thought in his head, finally deciding the cannon had earnt a name. The last few members of the firewardens were bought low and with the sun setting a horn sounded from the lizard ranks and the remaining few peeled off and retreated from the field. The battle had been a costly one for the dwarves but they would dig in and endure and more importantly they had reclaimed back their brewery. 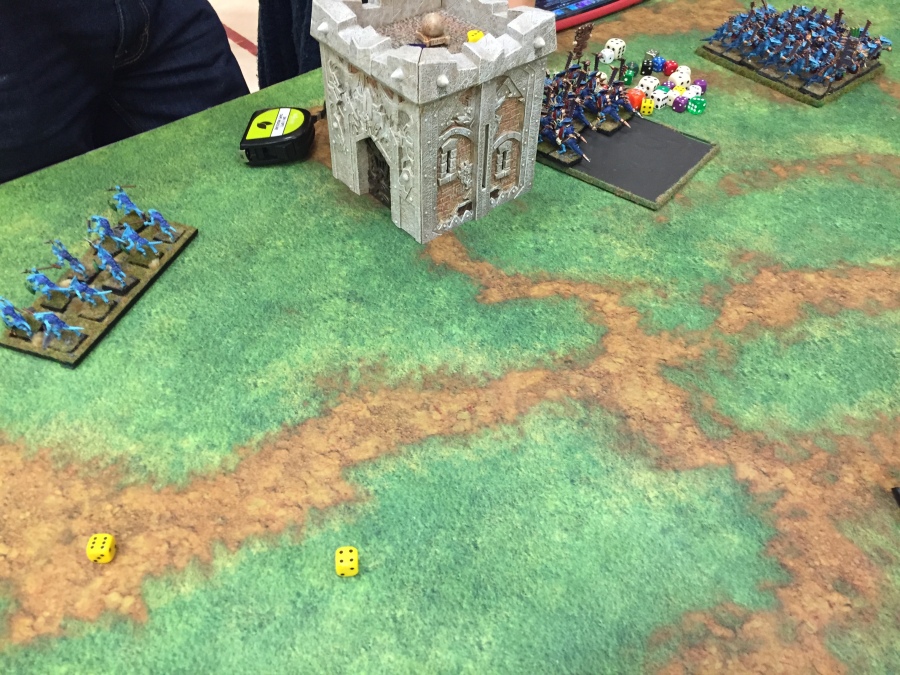 Well Alex is a slippery customer. Retreating with his main combat blocks whilst continually blocking my units with the skirmishers, apart from taking me by surprise and being highly irritating (*cough cowardly ;p*), really opened my eyes on how to use redirectors effectively – something I definitely need practice on. This was shown as I once again I failed to utilise my Gyro to do anything meaningful.

After totting up points, it was 1126 to 1121 in my favor, so almost honors even! Even with the additional 100VP’s (as I killed his general), I was short the 200VP’s needed to claim victory. Killing his Slann with the cannon was a stroke of luck, as although it blocked me from completing my secret mission, meant I was able to get a draw. With the way Alex played the latter half of the game (read – very well), he would have gained a clear victory without that failed look out sir roll. He definitely adapted to his changing circumstances better than I did.

All in all it was a very close game and could have gone either way.

So two games and two draws sits me currently top of the league (although I have played more games than anyone else) but more importantly I’ve had two great opponents and two very enjoyable games. It just reinforces why I love warhammer so much.

Points for the game were a follows:

So despite the draw, Alex took the game from a points view and our league is wide open at present.