After my run on space marines I had the itch to get back onto the fantasy bandwagon. Having painted a pretty simple colour scheme for the SM I thought I’d challenge myself and like a glutton for punishment went straight for the Bretonnians.

Like many I have a love/hate relationship with them. I love the army and models but the thought of painting them fills me me trepidation. It’s one army that screams out to have lavish attention paid to them and huge amounts of detail. However, having said that, if I kept that mindset, I will never ever get started on them, let alone finish painting the army!

As to what I should paint, there was only really one option and that was to finish of the Knights of the Realm unit I’d started last year. With 4 in the bag, that just left 8 remaining of the knights from the original 5th edition box I had bought on its release.

I kept with the same colour scheme, yellow and black and continued to try and expand the fluff to back up the decision. Overall I’m quite happy with them. Though it was definitely a case of wanting to get them off the board as I can’t say they were the most enjoyable to paint. As such I deliberately skipped detail (such as hoofs). I know I’ll have to revisit them to as least dry brush the tails and add magnets to the base. Looking at them, it also feels like I need to do something else with the torsos as they are a big expanse of yellow. We shall see. The main thing is it’s another part of the pile of shame done for now! It also makes me want to continue with the army in order to get in on the field (as and when the uk lockdown ever ends).

The Barony of Marc le Chauve is particularly rigid and feudal even by Bretonnian standards. It has to be, as the area of the Badlands it is located in is infested with Greenskins and Beastmen. Once Errant Knights have been promoted to Knights of the Realm, they earn the right to bear their own heraldry.  They are restricted however as the heraldry must maintain the colours of their assigned unit, helping to tighten the bonds of brotherhood when they ride forth. 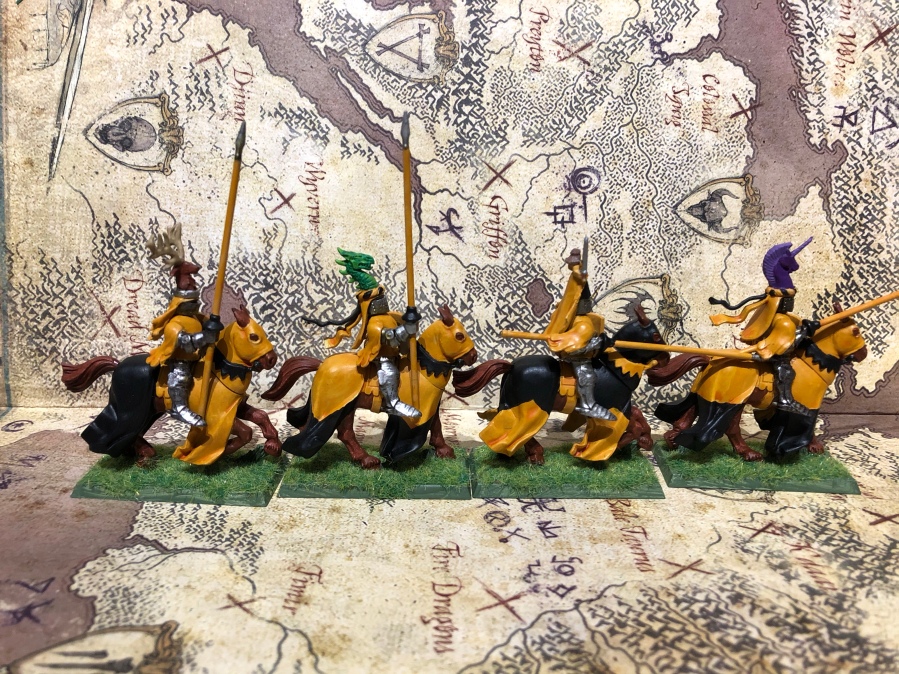 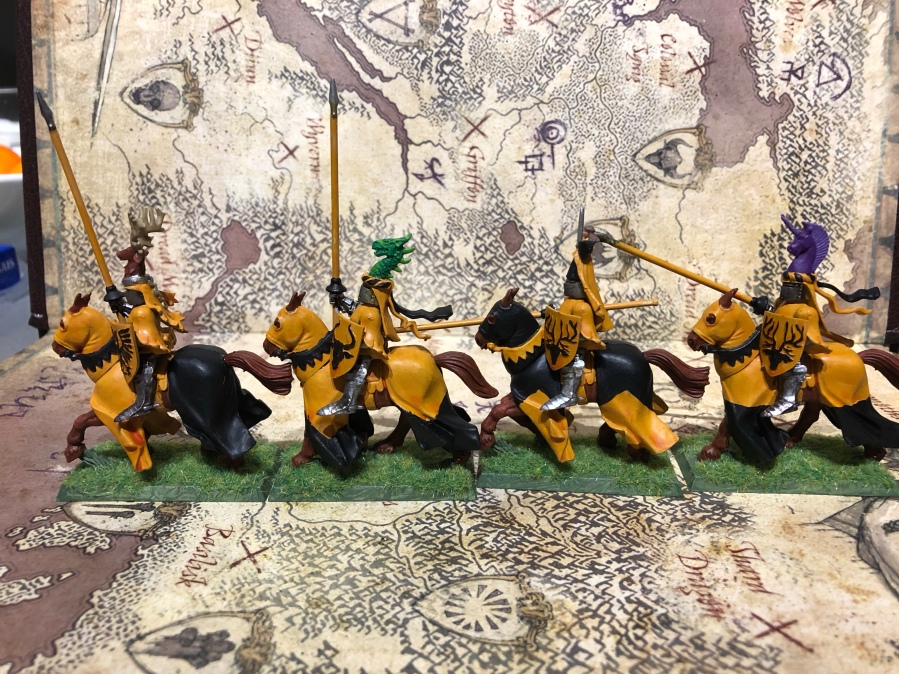 The full unit of 12 incl those previously painted

The Bretonnians knights have a unique formation called ‘the lance’. This is something that was introduced back in 5th ed (though it was a arrowhead formation back then). In 6th through 8th edition you could field the unit in a 3 wide formation and that counted as a standard rank (rather than the normal 5). This mean it was easier to get your maximum combat resolution from your rank bonus (+3). It also allowed all models on the edge of the formation to attack on the charge thus removing the normal disadvantage of the narrow frontage. So in 8th, on the charge, the above unit would get 11 Knight attacks. 4 attacks from the front rank (the champion gets 2), 6 from the knights down the flank and a final attack from the Knight in the centre of the second rank (8th editions supporting attack rule). On top of that, there would also be 9 horse attacks (and any long playing fantasy aficionado will tell you that they inevitably do more damage than the knights).

If you compare this to fielding them in a 6*2 formation (as other armies would). That would potentially net you 13 Knight attacks (but only if you could get all the front rank into base contact) but only 6 horse attacks and you would only get +1 combat resolution from ranks. On top of that, you lose any chance of getting the steadfast rule from having more ranks.

The lance makes it so you want to maximise the number of knights in the unit for that alpha strike charge.

Due to them losing strength bonuses on the round after charging, you ideally want 2 lances to hit the same target to maximise the impact, especially if your target is a horde.

It’s worth noting that just because you can field them in the lance, it doesn’t mean you have to.

The Tragic life and thoughts of an Inquisitor