I thought I’d start with something different today. It’s been an age since I’ve painted any 40K, but having split the indominatus box with a club mate, I actually had the urge to do so!

The Judiciar was actually the model I least liked in the box. It didn’t take long for me to work out why and one quick head swop later (using the spare helmeted captain head from the same box) and it’s now much better.

As he’s part of the Chaplaincy, I kept him in the standard black armour but his robes were painted khorne red, if only to warm the danger of getting to close to his executioner sword! The rest of the trim was kept simple, in line with the rest of the chapter, mainly silver with a bit of gold and his pauldron kept the stylised, Shadow Sentinel flame motif.

I’m not sure I’ll use him in game, not least as 40K is rarely high on my list but also because I love dreads, so it’s difficult to fit in other single model elite choices. However, if I did decide to run the Chapter as Black Templar’s, I could see myself using him as a ‘counts as’ Emperors Champion’. 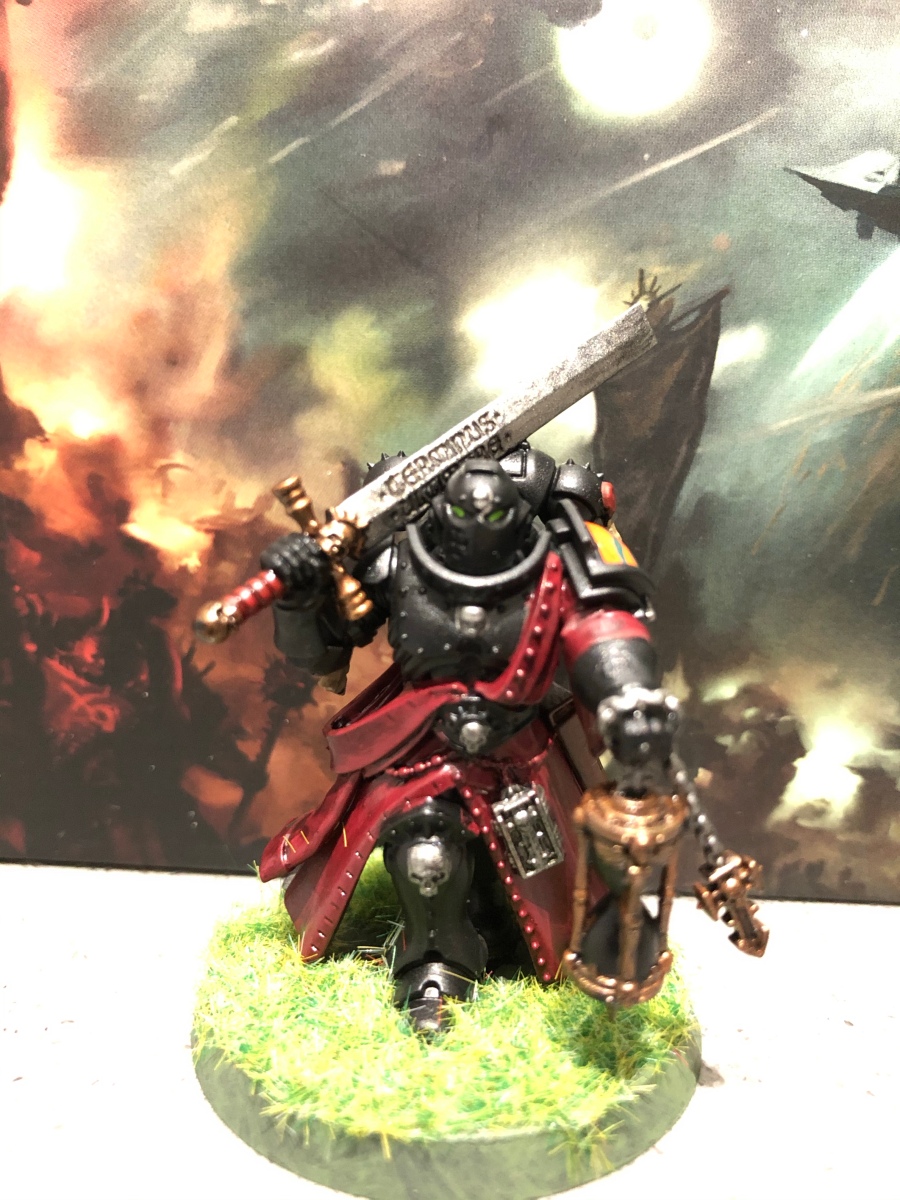 This unit was one that I got off one of my club mates, Steve (who incidentally is also our DND GM), a while back.

The unit came already part painted in the base colours, with a few looking to have been part converted with helm ornamentation having been removed (or perhaps head swopped). One of the models looked to have been fully painted to completion.

As such all I really had to do was try and finish the unit to the same scheme, which I have to say was really enjoyable to do, as it was different to one that I would normally churn out. Was it identical, no but it was close enough that you probably wouldn’t pick out the model the rest of the unit was painted to match at a glance. I also added additional highlighting and removed a couple of other helm ornaments to carry on the theme, as I had a rudimentary plan for the army back story.

The Baronetcy of Marc Le Chauve is based in the Border Princes, as such the structure and make up of the forces slightly differ from the normal Bretonnian offerings (this also conveniently would allow me to add Empire models into the army, namely the forge world Leitpold the Black as my General and the 4th ed. Empire lord on Pegasus, to name but a few).

Young Knights must undertake an Errancy, as do those in their homeland but they start out wearing the colours of their assigned unit. As they gain honours, they are bestowed helm ornamentations in recognition but only when they rise to the rank of Knight of the Realm, do they obtain their own Heraldry.

There, an easy explanation for the unit coherency scheme 😁.

The life and thoughts of a Jenn