August was a bit of a washout for me hobby wise. This was mainly down to being out of the country for two weeks on two sweet holidays (just rubbing it in). However, I did manage to finally finish off the last of the 4 big Lizardmen gribblies I currently own, namely the Stegadon Ancient with Engine of the Gods. As an added bonus this will qualify for Azazel’s Awesome August challenge. I’m normally so out of kilter with these (completing the wrong models in the wrong month) that I nearly fell out of my seat!

I don’t mind saying that this was the least enjoyable of the monsters I’ve painted. The Stegadon itself was fine but the Howdah was definitely a chore. Part of this was likely down to the increased detail on it and the fact that with my normal enthusiasm for building models, I glued it all together before even considering how i’d get to those hard to reach areas with a brush. One day i’ll paint before assembling!! 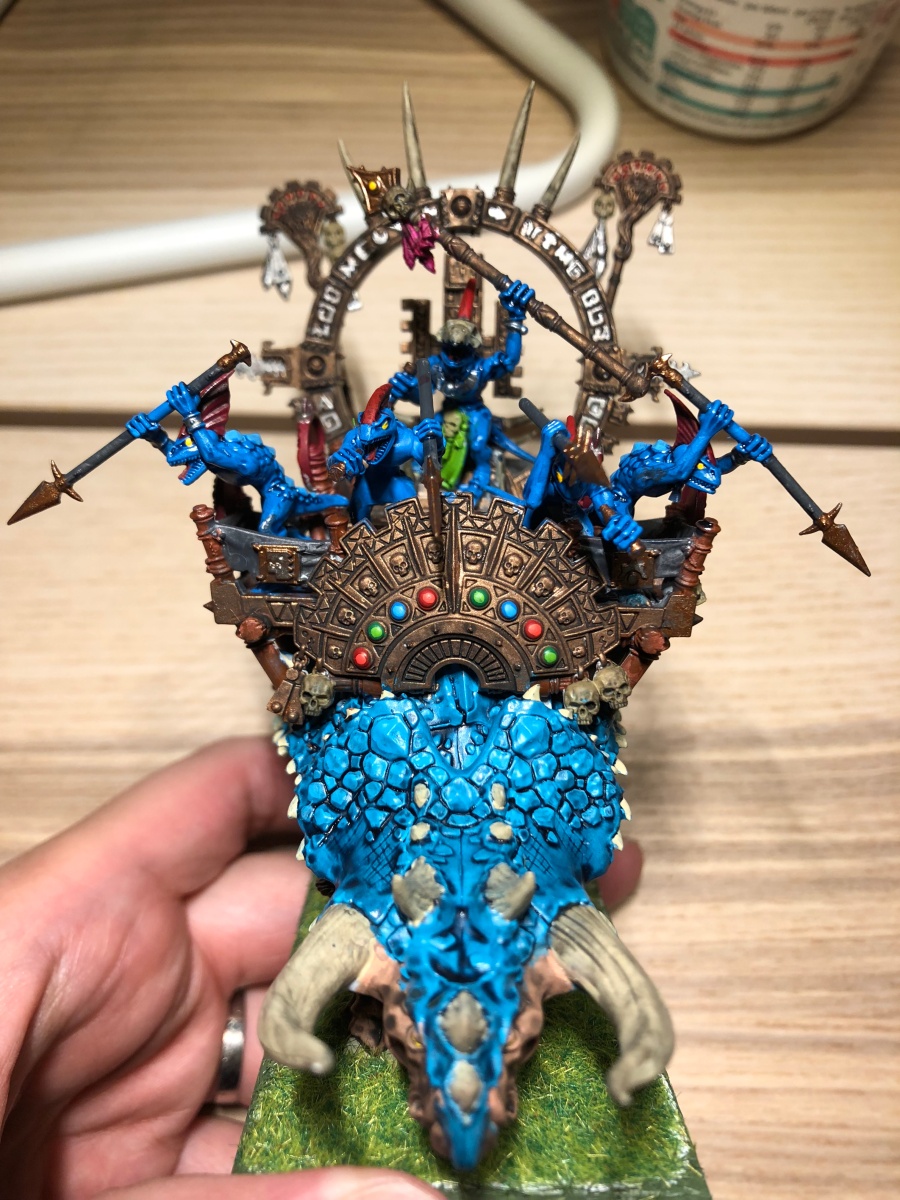 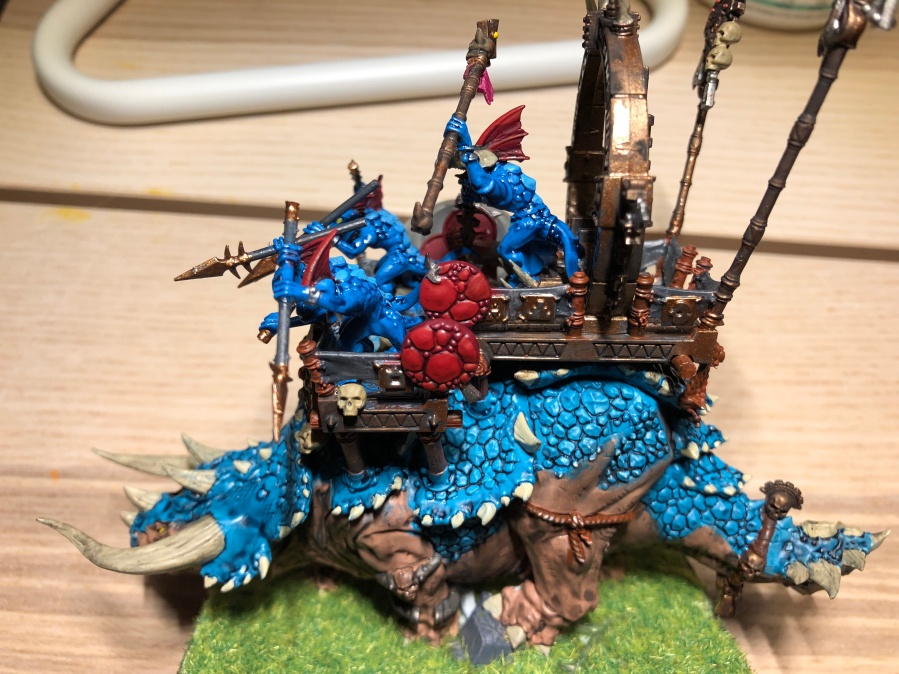 Stegadon – Belly – Zandri Dust with a Nuln oil wash. All bone was done with Ushabti bone and also washed with Nuln oil. The carapace was Temple Guard Blue, with a Drakenhof wash and then the scales painted again with Temple guard blue. The ropes were Doombull brown with an Agrax wash. I wanted a dirty more muted theme for this creature as it is hundreds of years old. If I were to paint a normal stegadon (it will happen!) then it will have brighter colours.

Howdah base and poles and cloth sides – started off as Mechanicus Standard Grey but then I changed my mind and the floor and Engine of the Gods were all painted with Balthasar Gold (again with a Nuln oil wash). Some areas were then highlighted with Balthasar gold. Skinks were Temple Guard blue with a drakenhof wash and highlighted with Teclis blue. Shields were a base of Khorne Red, wash of Carraburg Crimson and highlights of Mephiston red. Ironbreaker was used for all silver sections.

I’ll add my normal how they play section at the bottom of the post as I thought i’d just share a few shots of my recent travels. This is hobby related honestly!

I was lucky enough to get away recently twice (the joy of marrying a teacher, you can only get away during the school holidays). During the breaks I ensured that we did a couple of excursions to places that I wanted to see, mainly as I love old historic sites and I was also going to use them as inspiration for my hobby (looking at kickstarting you Bretonnians/scenery).

The first was a town called Mdina in Malta. This was the old medieval capital before the Knights of St Johns built a new one. It is a hill top walled town (the walls are massively thick and the streets are really narrow affairs). This kept the place very cool (about the only time on this sun blasted rock that I felt comfortable!). 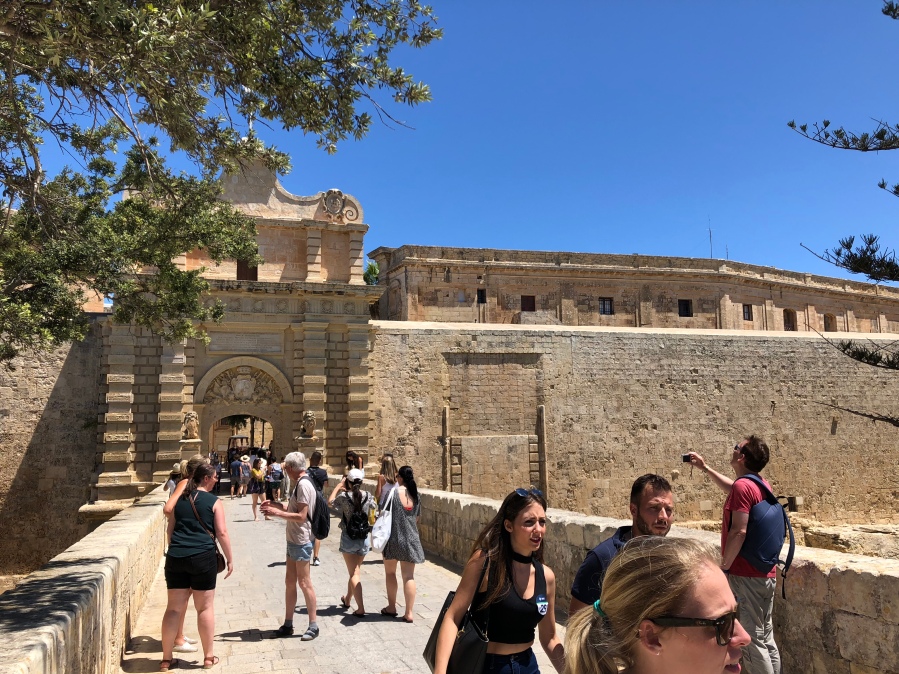 The second break was in Normandy/Brittany in France and we saw a few old towns (or rebuilt old towns – the war and all flattened a lot of them), such as St Malo, Dinan and lastly one of the most impressive places i’ve ever been – Mont St Michel. Seriously if you ever happen to be in this part of France and love wandering round castles and the like, I can’t recommend it enough. It’s like a mash up between Ghormanghast, Diagon Alley, The Scarlet Monastery (if you ever played WOW), Minas Tirith and any epic castle interior you’ve ever visited (even though its not a castle). As you can probably guess I’m a fan….

I do have to say, get there for when it opens. We did and when we left (around 3 hours later – 3 year old kids have a limited attention span…) the crowds incoming were horrendous! 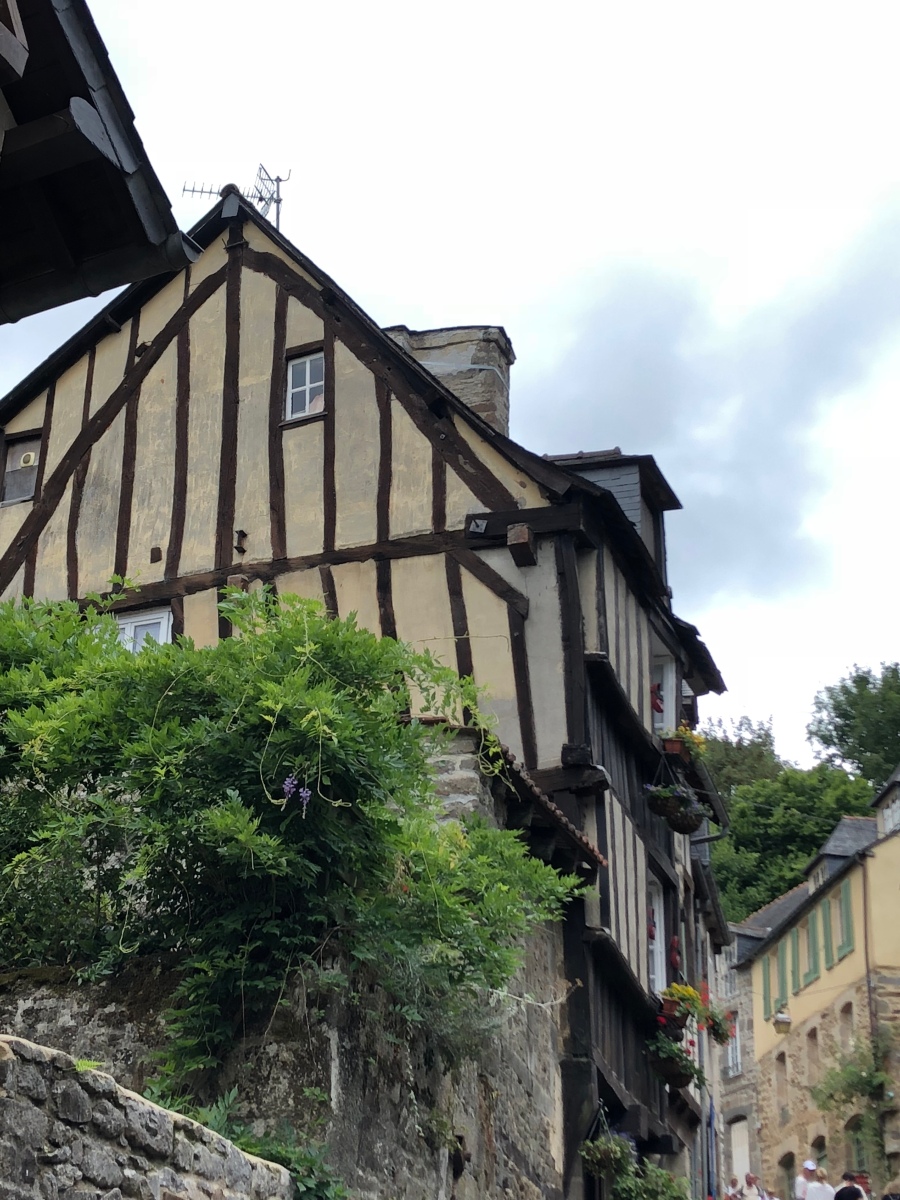 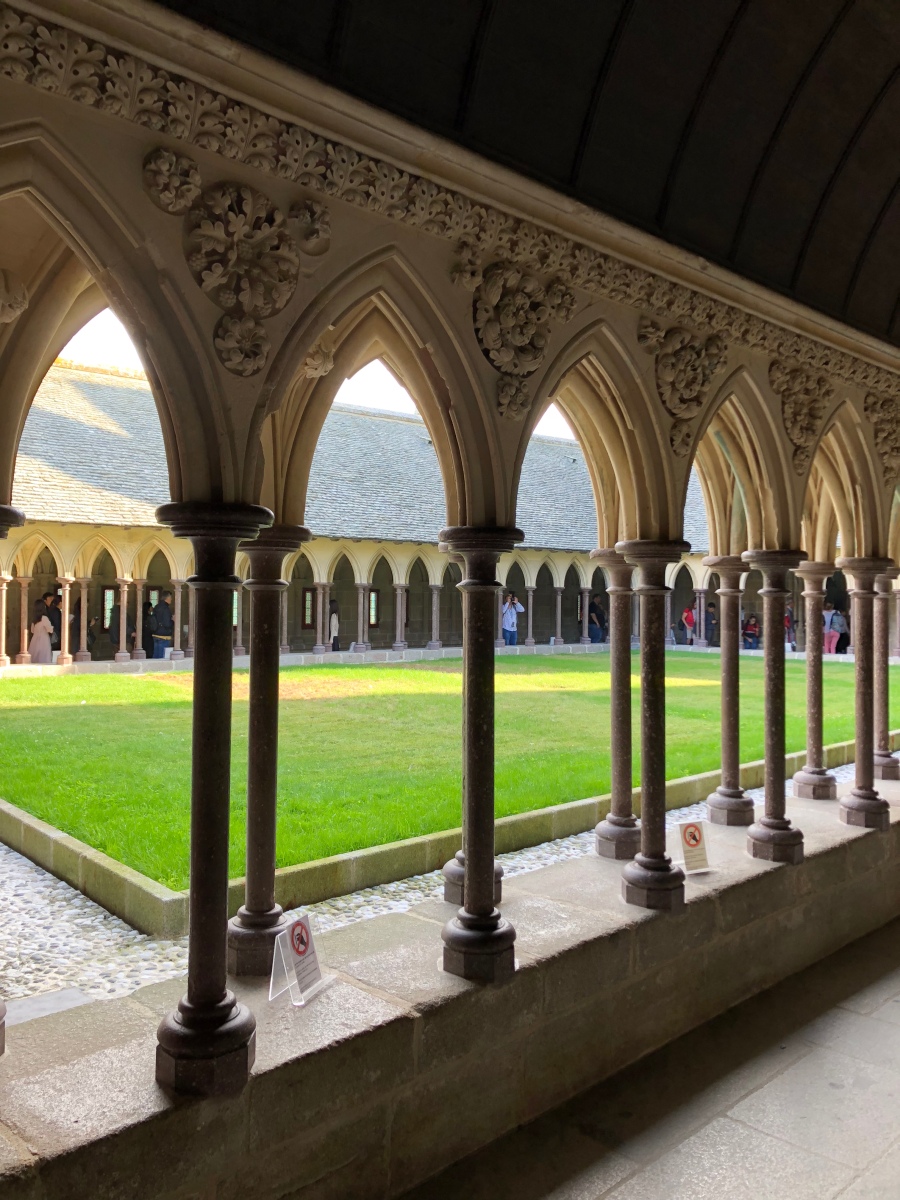 The stegadon is the classic work horse of the Lizardmen armies. It’s been in the army lists since the 5th edition book, when the army was redesigned and replaced the original Slann. I had one of the first stegadons released. A chunky metal affair that could have seriously been used to bludgeon someone to death. It went missing many years ago. It turned out my mum had been using it as a doorstop until she almost broke her toe on it, at which point it was thrown out. It’s one of the only earlier minis owned that I no longer have in my collection.

In the current 8th iteration there are two builds available from the one plastic kit. The main difference between them is what is mounted on the Howdah.

The first is what is known affectionately as the baby steg. It has 4 S5, i2 attacks, D6+1 impact hits and the obligatory Thunderstomp. It is WS3, T6 and has a 4+ scaly skin save, so although it can be hit reasonably easy, any attacks of S4 or under require a roll of 6 to wound it. The howdah has a 36″, S5, D3 wound, no armour save, bolt thrower on top, costs a base 215pts and is in the special section of the army list.

The second is the Ancient Steg. This differs from the baby steg in so far as it only has 3 attacks at i1 but they are at S6. The save improves to a 3+ and it comes with two giant blowpipes instead of a bolt thrower. Each fires 2D6 S3 poisoned shots at an 18″ range. This for 230pts and in your rare section.

They each have pros and cons but overall I much prefer the ancient steg. As most of your combat power is coming from the auto hitting impact hits and thunderstomp, losing the 1 attack makes little difference but having the extra pip of strength, so you wound most infantry on a 2+, does. Having the extra armour also helps keep you alive. The drop in initiative makes no practical difference as it only affects the 3 normal attacks as the D6+1 impact hits happen before normal attacks and D6 thunderstomps have the always strike last rule.

It’s worth noting that there are two upgrades available to both stegadons. The first gives the Unstoppable Stampede rule for 10pts (basically +1 attack when charging). By itself this is an ok rule and pretty cheap (and you want to be charging with your Steg anyway so this just adds a bit more punch). The second upgrade, sharpened horns (20pts) is potentially the more dangerous of the two. This gives each impact hit the D3 wound rule. If you get a charge off against monstrous infantry or Cavalry (such as ogres/skull crushers) or even other monsters or lone characters, there is a good chance you will decimate them. Although unlikely, you could get 21 wounds from just the impact hits. That’s 7 ogres. It’s for this reason that the stegs are often target no. 1 for players with monstrous units, as you can guarantee those players have been stung at some point.

Going back to comparing them, in some ways the ranged weapons on the howdahs are not important.

At first glance, the blowpipes might seem better with 4D6 poisoned shots but that will vary between 4-24 shots. They hit on a 4+ as standard but it always gets a minus 1 modifier for multiple shots (so hits on a 5+ at best). If shooting at over 9″ it gets a further neg 1 modifier and it moved it gets another neg 1 modifier. This means that it will likely be hitting only on 6’s or even 7’s (and if the latter, then poison is ineffective so you’ll then need to roll to wound).

The giant bow is a bit better. Again it hits as standard on a 4+. It has the same negative to hits for long range and movement but at worst it hits on a 6. However the chances are you will be marching your stegadon in order to get him into combat so you’ll be unlikely to be firing either the bow or pipes, hence why I said they are relatively unimportant in the overall scheme of things.

So with both of those options being lack lustre it feels lucky that the ancient stegadon has a further upgrade available that replaces the blowpipes: The Engine of the Gods. This gives a number of decent bonuses:

The first means that, at the start of each magic phase pick one of the 8 battle magic lores. Until the start of the next magic phase the casting values for each spell are reduced by one. It may not sound much but this can really improve the odds of casting, especially with lower level wizards.

The second benefit is it gives a 6++ Ward to all units within 6″. This may seem to be a limited range but you want to be using this monster in close support of units and the ward also gives it a chance against cannon shots. In 8th, where combats can be brutal affairs, having a 1 in 6 chance of ignoring wounds, is better than you think.

The third thing it gives is a bound spell (power level 3). Any enemy unit within 4D6″ suffers D6 S4 hits. This isn’t anything special but it can be cast on a single dice roll of 3+ and it is a bubble effect, so can hit multiple units. Again it emphasises that you want to be in the thick of the enemy lines.

The Engine costs 50pts, which isn’t inconsiderable. If I was running a magic lite, monster mash list, with just the level 2 special character Tetto’ekko in it (which funnily enough I am looking to do) then I feel the upgrade is worth it.

Unlike monsters such as the Carnosaur, Steg’s work better if they are placed more centrally where they can support your combat blocks. That isn’t to say they can’t work on the flanks, the baby steg is better suited to this as the bolt thrower works well when fired from the flank. However both the ancient steg’s giant blow pipes & Engine of the Gods abilities, are much shorter range so need to be front and central.

The final thing I had to mention that the Engine of the Gods has going for it, is it looks like a stargate. Yes I’m a fanboy of that show. I can’t help it and as soon as I made the connection I had to build the kit in that way!