My hobby progress slowly trundles on. End of March/April is always a terrible time as its our year end, I have to complete my team’s appraisals and then the auditors arrive. All combine to ensure long hours, working at home and all round general knackeredness prevails. Thankfully that is all behind me and I can concentrate on the joy that is hobby!

So I’ve decided to try and clear the pile of miniatures that have been building up on my paint board and this one has been sitting there since I received him in the made to order Beastmen run some time back.

The blue skin may seem an odd choice as it doesn’t match most of my beastmen army (as they are primarily grey) but he does match the 5 centigor I picked up on ebay a few years ago and it doesn’t look out of place.

The eagle eyed of you may of noticed that he is missing a Unicorn horn on his helmet and two spikes on his waist. I have no idea if I received these when I got him or if I mislaid them in the intervening period. 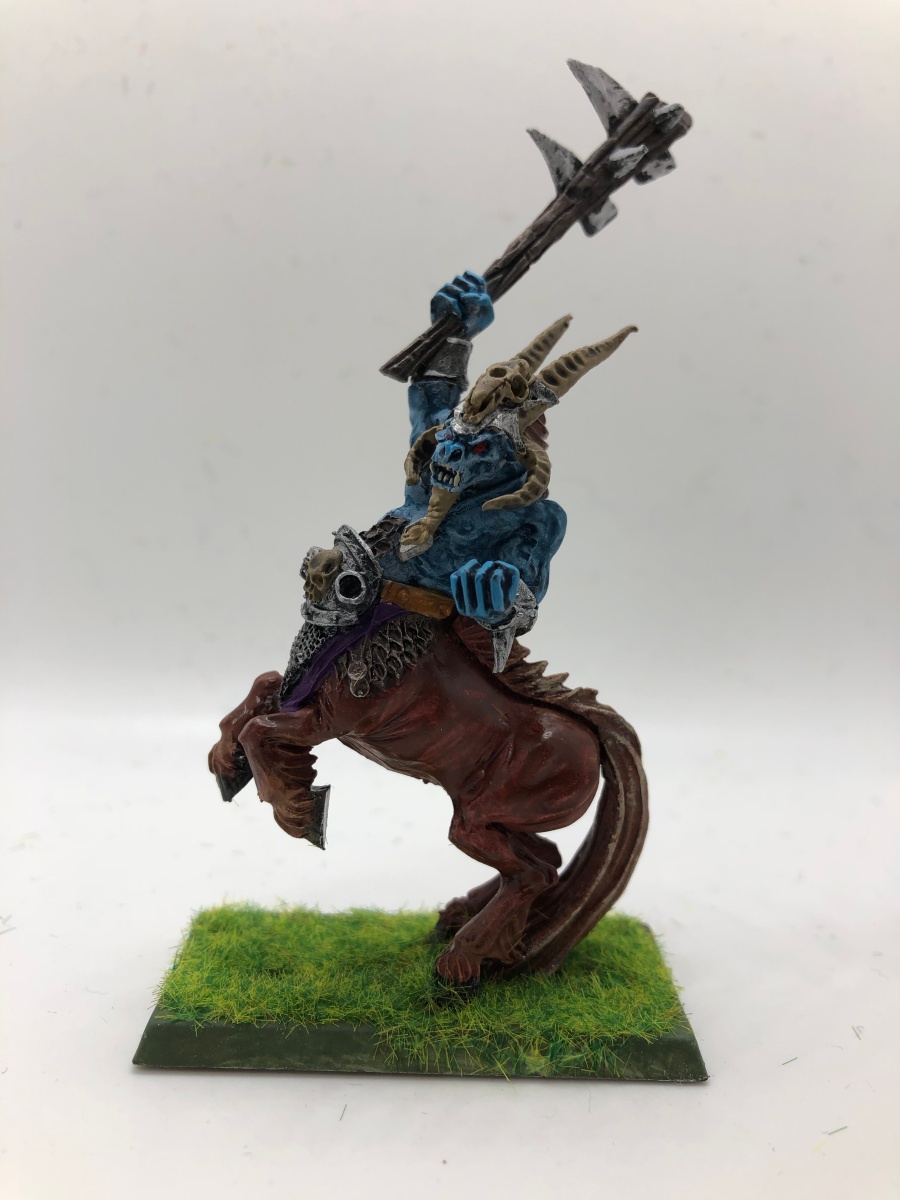 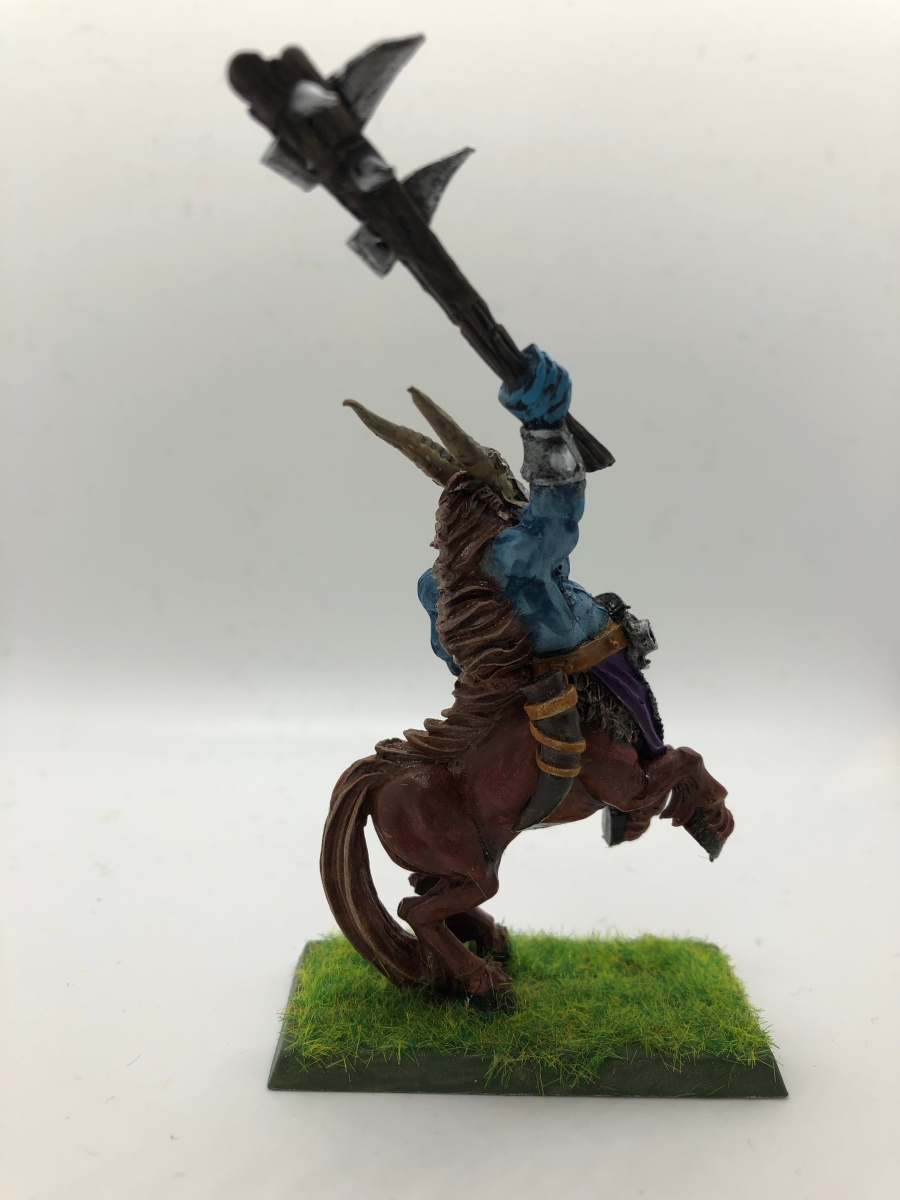 Ghorros Warhoof is a meant to be the father of a thousand Centigors. He is a Beastmen special character with hero level stats: Weapon Skill (WS) 5, Str 5, Toughness 4, 2 wounds and 4 attacks but unusually he can only be purchased as a unit champion upgrade (replacing the option to buy a normal champion). You do pay a pretty premium for him at 155pts. That is more than the minimum 5 Centigor you need to purchase to accompany him (125pts).

So what else do you get for that cost? Well his unit all gain +1 WS. That is pretty good as it takes normal centigor to WS 5 as well and that is elite troop stats. His weapon causes D3 wounds, so he is good at taking out monstrous infantry. He also gets Magic Resistance (2) which is a bit meah but he gets it as he wears the skull of a unicorn he slaughtered, so at least it fits the fluff (as Unicorns get MR (2) as standard).

His last rule is good but for all the wrong reasons. If he dies, the whole army gets +1 to their primal fury rolls (the ability to re-roll hits in every combat). Its a great boost as the Beastmen army needs this to be competitive but he needs to die to grant it.

Is he worth taking? Maybe. The issue is you need to take centigor to field him. They are OK but not a great option in 8th. His cost is also quite high so that if you field just 4 centigor and him it’s 276pts. That’s a lot for just 5 models with only 1 wound and a 4+ save. I will be using him later in the year to see how he works out as at the very least, I enjoy taking more unusual choices.

Quite some time back I pledged to the Willy Miniatures Vampire Blood bowl team KS. This was basically them updating the existing team from metal to resin with a few new mini’s thrown in and some other extras.

Compared to many of you i’m a KS novice but I’ve backed just under a dozen and in the main I’ve been pretty pleased with them. There have been delays on some but I can deal with that. What I can’t deal with is a total lack of communication from companies over months and months and this is what happened with Willy. When they finally deigned to respond after 4 months of silence, it was just to say they basically didn’t feel they needed to post an update when nothing had changed on the status of the project from the last update. It was the attitude of the reply that really p*ssed me off. In this day and age communication is so key to customer service and they really dropped the ball here.

With my little rant out the way (yes I could have gone on), I finally received my ‘dulex team’ package in the post and I must say I was impressed. The detail and crispness of the mini’s was really good, I barely had to clean them up at all. Every model is different, there were no duplicates which is always nice. The pitch was also double sided and had a nice wood elf themed pitch on the reverse.

I only have 2 small gripes, the first is with the pitch, or specifically the two dugouts. The card is a tad flimsy, especially in comparison with GW’s (the pitch is fine). The second is to do with the injection points (and this is something I’ve come across with other mini’s from other companies). A number of the models have separate limbs and like most models, they have extensions (plugs) that slot into the body to give the connection a bit more strength. Some of the injection points covered (or part covered) the holes so you had to trim the ‘plugs (no idea of the correct term) or try and carve out the blockage in the hole. I just find it annoying that you have to do this. 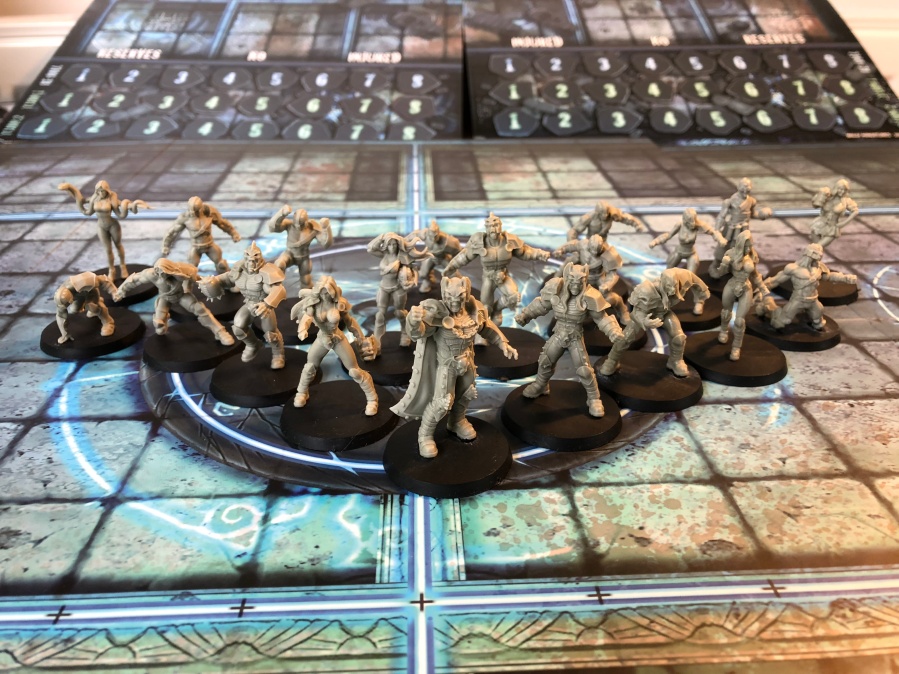 Ok so this post has been a bit negative but I am stoked by the above team and the Dukes of Drakenhof (working team name) will more than likely be my entry to the new club Bloodbowl season in November.

In the current league I was knocked out in the quarter finals by some filthy dwarves in a close fought extra time 2-1 ‘golden goal’ loss to Mike. With literally 4 players left on the pitch at the end, the game of attrition went to the stunted ones. Mike was doubly pleased as my Norse had trounced his Human team in the previous season.

In a surprising turn of events, I ended up being the joint top scorer* and so have a final ‘bonus’ game against Chris (another player out for revenge after I also beat (up) his Dark Elves last season). This time he will be fielding his Shambling Undead to see who wins the prize.

* The prizes for most TD’s and Casualties etc. are based on the knockout stages.

In other news, I did upgrade the site and have been playing around with different designs. I have just realised you can actually see what it will look like on a mobile from the design page (doh!). Expect this to change a few more times in the upcoming months.

We’ve also just had shelves/cupboards built in our lounge so I can finally start unpacking all my books. I can’t express how much this has killed me over the last 7 months. But i’m now a very happy bunny! 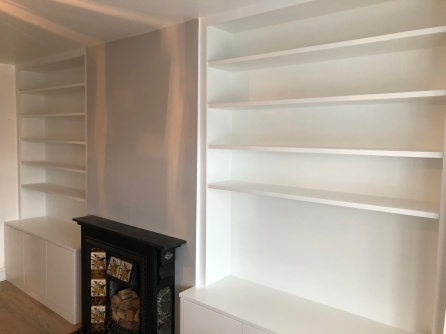 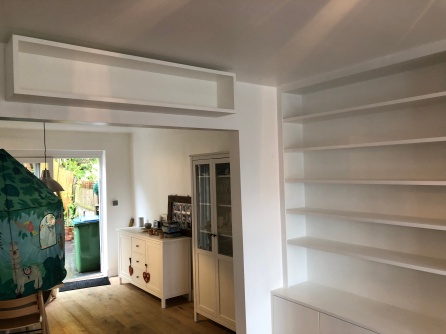