It’s been bugging me that I had one element of my Kings of War competition army that wasn’t painted and so I finally knuckled down and ‘finished’ off the 2 troops of Beastpacks.

Lacking inspiration and to ensure continuity with the rest of the army, I followed the same procedure as the wolves in the Stampede. This meant they looked pretty bland (grey with a blue wash and dry brushed) so I added a few extra bits of detail ensuring the scales/spines were green with a bit of highlighting to signify they might be poisoned.

I still need to base them but at least I now have a fully painted comp’ army. 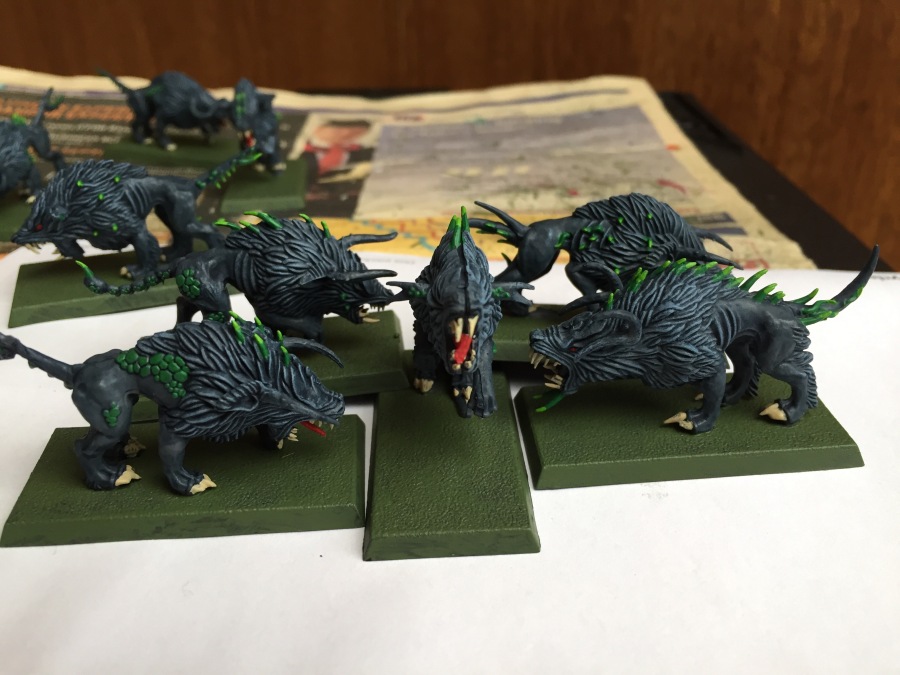 Next on the painting table list is to revisit the ghorgon/Brutox models and add more detail to break up the brown and then I may even (shock horror) open up the space marine box, as I’ve been reading a number of the ’40k battles’ series recently and this together with the new rule set, actually has me interested (ok quite excited) about trying it out again! I’ve briefly covered/shown part of my paint scheme in a previous post (dark green with tiger stripes on an orange background as the chapter logo). They will of course be a chapter of my own devising but are currently leaning towards being scions of the blood angels, mainly as loving the fluff around their curse and having just finished off the novel Flesh Tearers it reinforced this. (This might possibly change as previously I leant towards imperial fists but found them a bit boring. But that’s the joy of creating your own chapter, you can play a few games and try out the army styles first, especially as it will just be some friendly games at the club).

With the break from the traditional shades of red on the marines, I might the have to paint the Death Company (once bought) red with black crosses as at least then they will tie back to the parent chapter but as a mirror image as in this chapter those with the curse are more revered for having embraced their fathers final wish for vengeance and blood. Those who hold off from the curse see themselves as having the unenviable duty of overseeing the chapter to ensure its continuality for the next generation. A necessity before they can allow themselves to embrace their fathers legacy. Needless to say, with their larger than average Death Company, the chapter operates on the fringes of the imperium and will normally only commit to solitary actions against targets where total annihilation is required. Their home world’s location currently remains a mystery but it is rumoured to be deep within Xenos territory, on a planet previously colonised but long forgotten by imperium records.