Or, “The great regression of skill and ability”

After spending Wednesday evening at Steve’s house with Matt, Pete and Greg in one of our D&D sessions, I somehow managed to wrangle also going out on Friday in order to finish the last of my stage 2 group games, this time against Neil Robbins Daemons (his list). If you’ve read any of my blog you know that I’ve played Neil quite a few times before and I knew I would have to bring my ‘A’ game.

A recap of my list can be found here.

Again i’ll caveat that all mistakes are due to memory (and the lack of notes).

In another first for me, we rolled up the custom ‘number 6’ scenario, king of the hill, which replaced the watch tower scenario from the book. This is played as per ‘Battleline, however, you place a hill in the centre of the board with a marker on it. At the end of the game, the player that controls the marker with a fortitude bearing unit, wins.

I rolled up 6 pieces of terrain (again) and they were as follows:

2 Hills (one normal, one scree – which counts as dangerous terrain). These were in addition to the hill you take as part of the scenario (so overall there were 7 bits of terrain).

I chose take a message and Neil chose stash the cash.

Khazbar shook his head, trying to clear the malaise that had weighed upon him over the last few weeks. At every turn the Daemons had dogged his step. After the first victory against the great horde of Nurgle, he had faced sustained attacks, Daemons repeatedly popping into the mortal realm and attacking before fading away. His once mighty Herd had shrunk, through a combination of casualties and cowardly desertion, to the pitiful remnants that surrounded him. As they slunk into the swamp, that appeared to be his only remaining avenue, his scouts timidly approached jibbering about vast host ahead. Sighing in resignation he ordered the horde forward determined one way or another to finish this.

Following paths out of the mist wreathed swamp, the herd found itself split in two. Khazbar watched as Wazzock led the bestigors and supporting units on his flank, forward at all due haste, in the process boosting both their strength and resilience. He couldn’t shake the feeling that something was terribly wrong but ordered his flank forward too.

A booming roar echoed over the field of battle and a great bronze skull hurtled down flattening one of the Razorgor. This was too much for the nearby chariot that turned and fled.

With a shriek the Furies charged into the bestigors, Wazzock desperately fended off the multitude of attacks that came his way, sustaining a wound in the process. His body guard took swift revenge, tearing the creatures apart for no loss.

The polar opposite occurred a few metres away as one of the Heralds charged out of his unit and cut down 1 of the bird women, the rest chose discretion over valour and decided to leg it.

Holding one claw over his wound, Wazzock paused to invoke the power of the Chalice he carried and took some satisfaction that the Daemon engine was unable to fire as it was engulfed in a dark rain.

An incomprehensible chittering broke out from one of the small units of horrors and an infernal gateway burst into being and tore through the horde of Gor, taking out a quarter of the unit. Six more horrors then appeared from the warp to join the unit. Zhurock shouldered aside some of his lesser brethren and cuffed Khazbar hard enough to temporarily shake off the malaise affecting him and he was able to dispel the follow up spells. 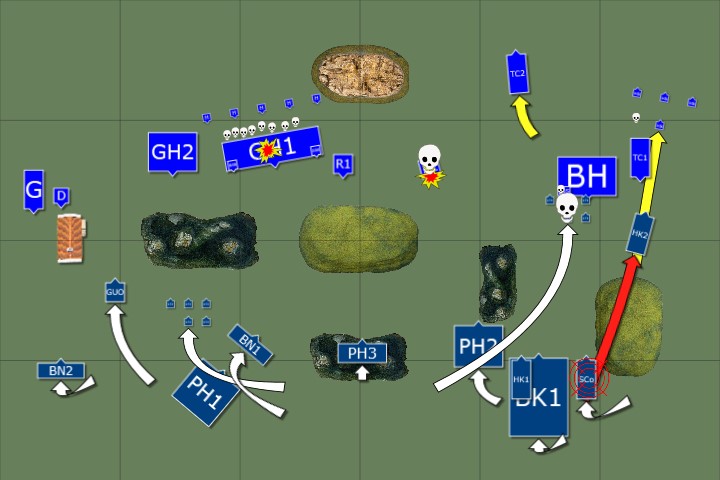 With a roar the doombull charged into the nearest unit of Beasts causing a few wounds and gaining an extra attack in the process. On the other flank the Chariot thundered into the Herald that had made such short work of the harpies and completely failed to cause any wounds despite 4 impact hits. It return it was slapped silly by the Herald and Wazzock and his bodyguard, seeing that they were looking rather lonesome, decided they had a pressing engagement elsewhere and ran past the freshly rallied harpies. Khazbar could only look on in despair as his army crumbled around him.

With Wazzock running, the power of the Chalice was broken and the crew of the Skull Cannon roared praise to their God and shot a flaming ball into the remaining Razorgor, leaving nothing but hunks of charred flesh in its wake.

The Herald that had caused so much damage, finished what it had started and ran down Wazzock and the unit of Bestigor. The Harpies decided they did not want to face this force of destruction and again fled.

The second unit of Furies advanced to block the horde of Gor and the Great Unclean One, not wanting to risk charging through the mist wreathed marsh in front of him, instead advanced to the side of the Gor herd.

The Doombull continued to tear into the Beasts but despite their powers of regeneration blunting his rampage he continued to grow in power. 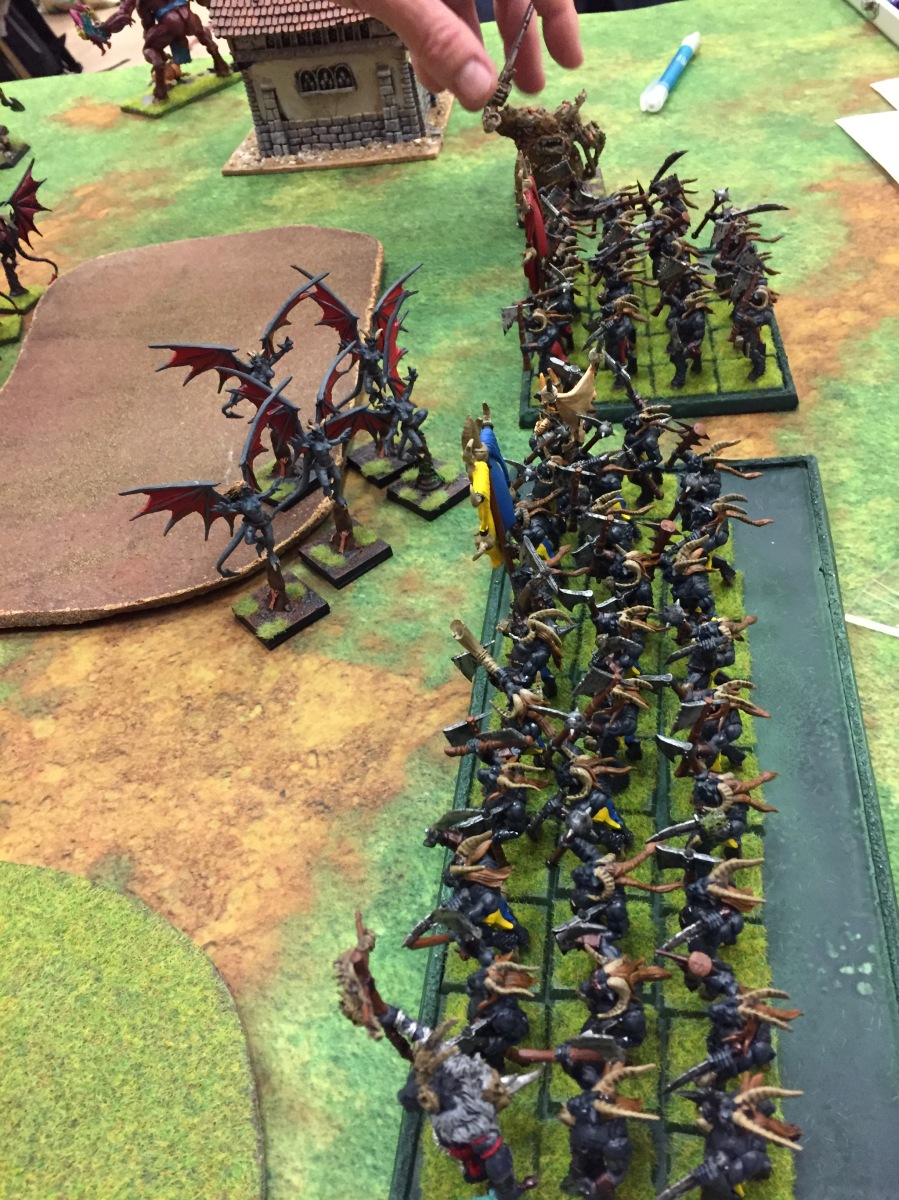 Khazbar looked to his left and watch the harpies fly off into the swamp but took  some comfort that the remaining chariot on the flank, garnered an smidgen of courage and turned to face the approaching Herald that had decimated the flank.

On his right things were looking a little better, the Ghorgon bellowed and charged in to join his smaller sibling, the two of them making short work of the remaining Beasts. The remaining unit of harpies flew into the large unit of Horrors, sacrificing themselves to ensure they delivered their message.

Seeing some partial success at last, Khazbar ordered the horde to charge the furies blocking their path, making short work of them.

The Horrors once again summoned their gateway and Khazbar could only stare stupefied as it tore through the former horde, sucking 8 of the hapless Gor into the realm of Chaos. The Skull cannon added to the carnage and Khazbar was saved as one of the remaining loyal Gor pushed him to one side before taking the brunt of the impact.

The Herald of Khorne charged the remaining chariot and finished his route of the left flank, as it turned tail and fled into a patch of swamp where it sunk taking all the crew with it.

The Great Unclean One’s laughter burbled as it swelled with even more power from the sword it was wielding and it smashed into the smaller Gor unit, leaving half the unit as bubbling diseased carcasses. 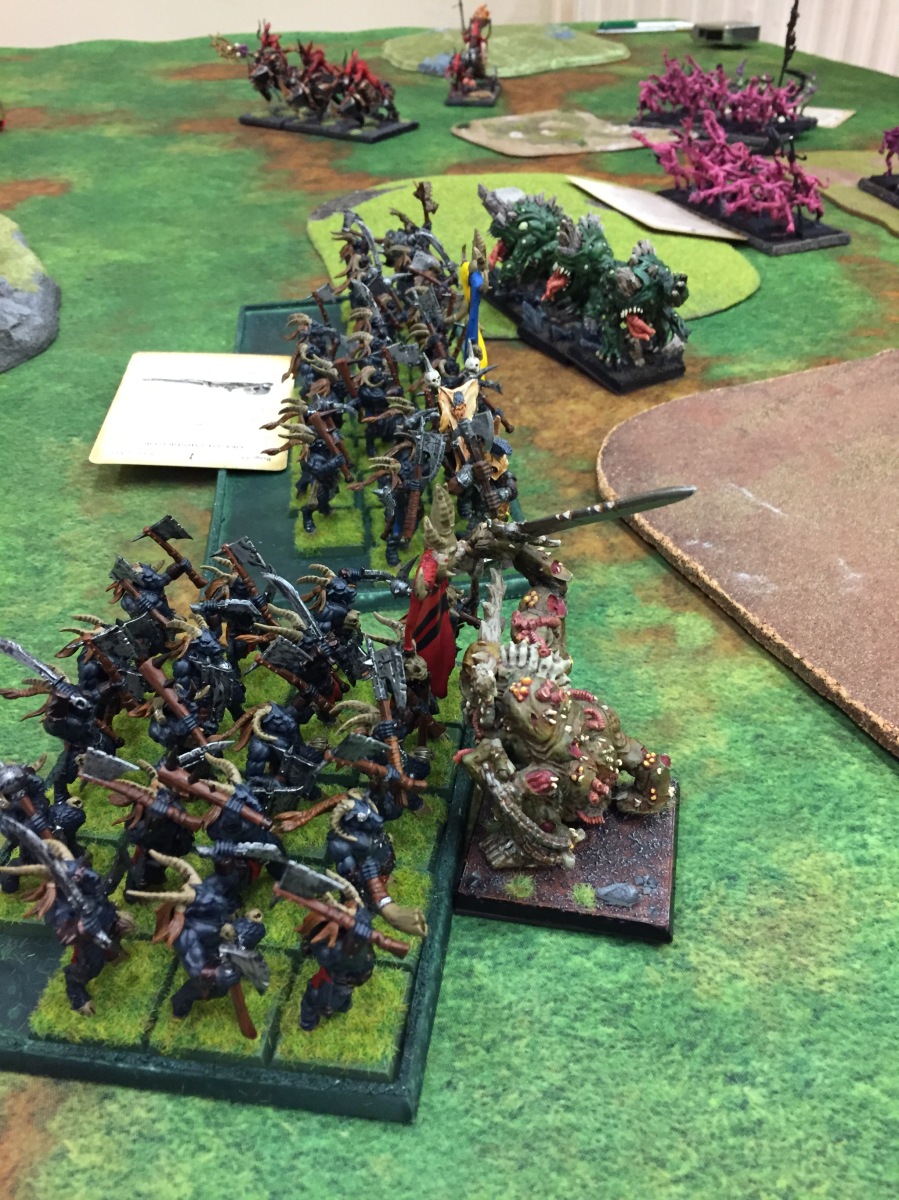 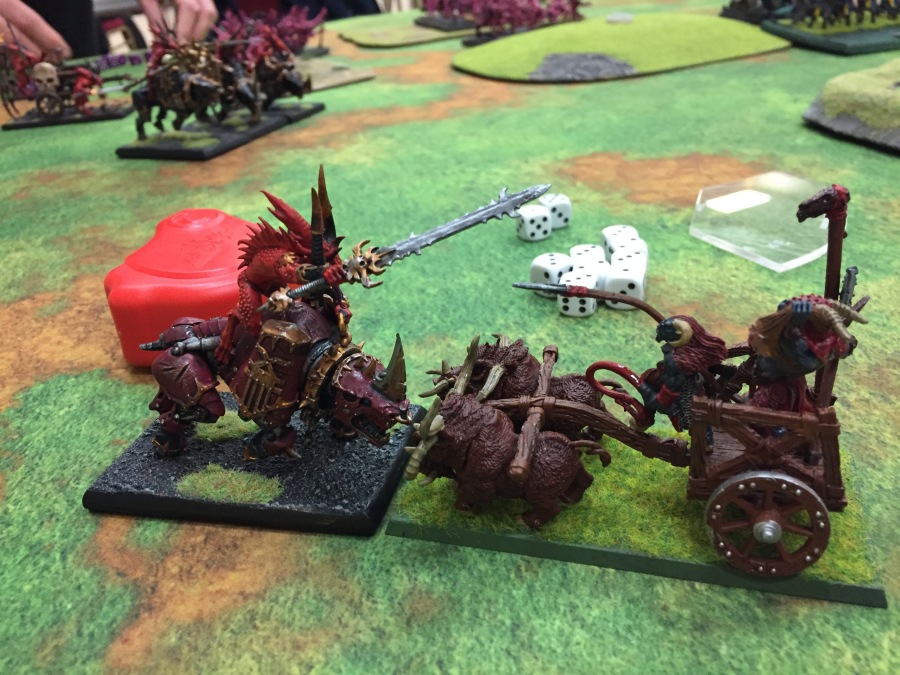 With a sharp wrench, Khazbar regained control of his mind, realising that the greater Daemon had been toying with him since the start. Looking around he could not help but despair as the Unclean One butchered the rest of the smaller herd herd. The Ghorgon and Doombull rampaging round would be of no help to him and he ordered the few remaining Gor in his horde to form up round him in preparation of their last stand. 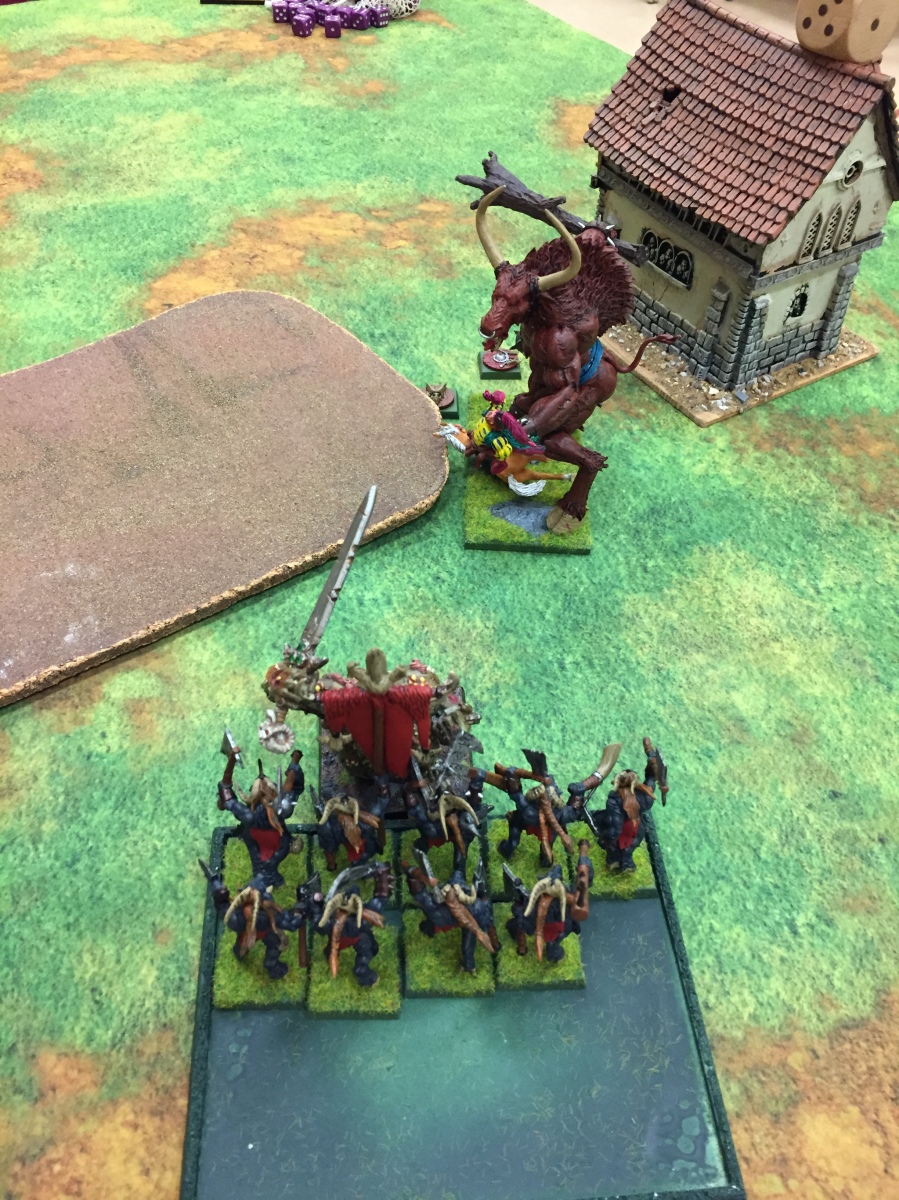 With an almightly rumble, Nurgle’s chosen representative and his beasts charged into the remaining Gor cutting them down with no mercy. Khazbar was saved as the protective amulets around his neck flared up, transporting him to safety but with that the battle was over and he could only slink off to lick his wounds. 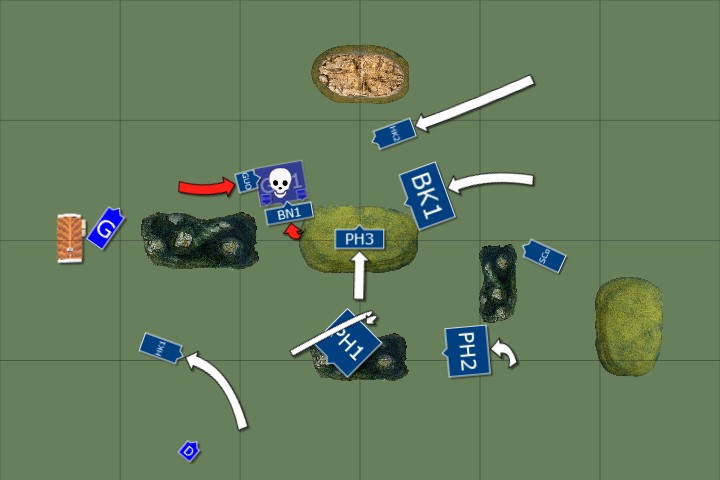 What a monumental balls up! That was possibly the worst game of 8th I’ve played in over a year (perhaps ever). Effectively tabled on turn 4 is shockingly bad form. All there is to do is try and dissect what went wrong and never repeat it.

Where do I start? The obvious place is deployment. After the issues I had in the first group 2 game and not knowing the rules around rivers, I let the number of marshes, my fear of their impact and their placement, get inside of my head. I further compounded this by then deciding to split up my army when, from previous play, I knew it was essential to keep everything within the leadership/BSB bubble. I paid the price for this when the left flank just collapsed from panic, putting me on the back foot immediately.

Even then I could have gotten something from the battle but I dithered around with the Gor not moving them forward and allowing Neil to decimate them with magic.

As Neil further pointed out placing the Ghorgon on the flank away from the cannon was understandable but the Doombull had a 2++ against it as it was flaming (which I forgot) and putting them both on the flank effectively took them out of the game. I also should have cast Mindrazor on the small Gor unit ready for the Greater Daemon’s charge.

When looking at his list last year, I knew that I needed to be aggressive and get into combat and with the limited games played I knew I needed to support the blocks with the chariots/Doombull etc, whilst redirecting with chaff. I failed on all fronts but especially with my two blocks of Gor letting him dictate the fights. It was like I forgot how to use the army.

Going further, I think part of the problem was I’ve been watching and reading about Kings of War almost daily since my last game with Paul in December (I need something to occupy me on the commute) and as such, did not have my Warhammer hat on, was not at all prepared, hadn’t looked at the lists since I last played and generally just played terribly.

None of this takes anything away from Neil, who played his normal solid game.

I can only apologise to Neil for not giving him more of a challenge (not that I think he was complaining as it allowed him to rack up maximum points), although I think even he was surprised at the number of  unforced errors and cock ups I managed to roll out during the game.