Somehow I managed to miss Steve’s latest league email last week, so apologies for the delay in posting his update. Dan is further showing his dominance in the Emperor league, matching Neil in the Fateweaver league point for point. It is now down to Pete to prevent a 3rd win.

Paul’s win and completion of the secret mission has put him in a strong position in the Archaon league but a first place spot is not guaranteed for him as yet. He will have to see how the other games play out. I do wonder if he should get a bonus point or two for being the first player to complete all his group games! Underneath the updated league table is a battle report from Paul covering his encounter with Steve.

On the subject of Paul, I stand in awe of his painting ability and thoroughly recommend checking out his website to see a showcase of his work. I have included a couple of poorly taken shots of his nurgle army in his report.

Last Friday we had two more games in the WFB tournament and the updated league tables are attached.

In the Emperor league, Chris played his debut game with his new Ogres against Dan’s Empire. Both generals achieved their missions  – Hero-Hammered for Dan and Three and Fourpence for Chris. Chris came second, but he did keep a single Maneater alive to thwart Dan’s attempt to table the hefty horde.

Over in the Archaon league I failed to kill more than 1 unit despite 4 turns of combat in a tense Battleline scenario. Ooph!. I did manage to sneak a unit of marauder horse off the table for Three and Fourpence and Paul successfully stashed the cash in a house packed with Plaguebearers. Well done to Paul for being the first person to complete all his games with a neat spread of a win, loss and a draw. 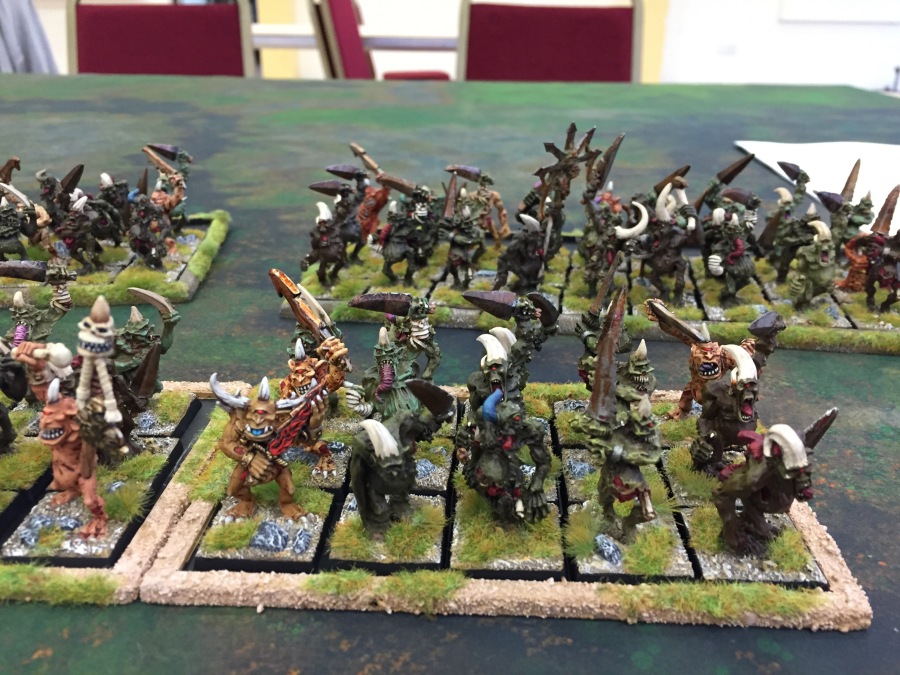 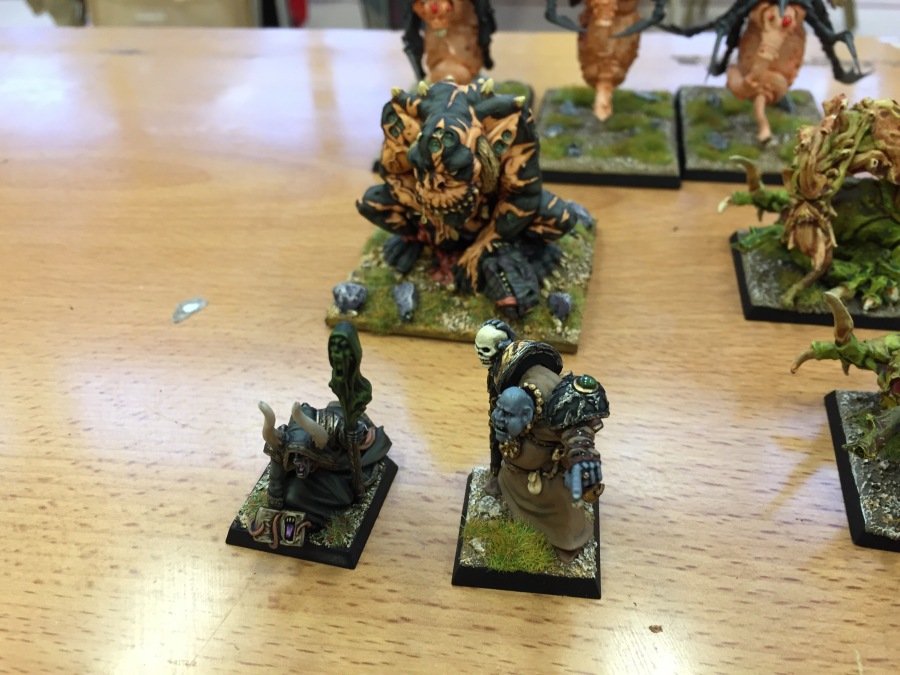 I am going to give you a battle report of a league game between Steve McG and myself totally from my own prospective.

After playing 2 previous games in the league and getting a beaten and a draw things were not looking good to qualify for the next stage of the comp, although I had amassed a healthy amount of points by completing my missions.

I could not afford to lose my last game against Steve so I purposefully played for a draw and to successfully gain another mission.

We had three pieces of terrain, a building which I was grateful for, an ordinary hill and a forest for a battleline scenario. Steve got the first piece of terrain and promptly picked up the building which I wanted (and I am saying to myself don’t place in the middle of the table any flank will do) it was placed in the middle of the table in my left flank sector. Great because I was going to make a dash for it and “Stash the cash”. I placed the hill on the right flank right in the corner of Steve’s deployment zone and Steve then laid the forest to the left in his deployment zone.

I won the roll off for picking sides and I chose to stay where I was, I also got to lay the first unit and I placed a unit of Plaguebearers with the banner of swiftness directly in front of the building.

I formed up in a line with my Beasts of Nurgle interspersed with the 2 remaining Plaguebearer units and placed my Rot Flies on my left flank.

Steve placed his Skull Crushers and Warrior unit centrally and his other units were dotted around his deployment zone.

Because I had fewer units I gained the plus 1 and won the roll of for going first.

You guessed it the first units of Plaguebearers rushed towards the building I sent the 2 Beasts of Nurgle out and placed them in front of Frenzy units to try and tempt them out of position. The remaining 2 plaguebearer units retreated 4” towards the base line. The idea being to limit the number of rounds they would have in combat.

I rolled an 8 for Magic which meant because of my special Reign of the gods table every unengaged unit of Steve’s would have to roll a D6 and didn’t want a 6 for each. 3 units did roll a 6 and that meant they would have pass a leadership test on 3D6 and take wounds without armour saves. RESULT : 7 Marauders dead,4 wound on the Skull Crushers and 2 Fast Cavalry dead. I did not cast any spells for fear of miscasting because I needed my level 4 intact to counter Steve’s magic phase.

Steve marched straight across the table and moved his Fast Cavalry round his right flank. Steve did a nasty spell on a unit of plaguebearers where I lost 4 dead.

My second turn you guessed it the Plaguebearers jammed the door way to enter the building. The remaining 2 plaguebearer units retreated 4” towards the base line again. The 2 beasts again got in position to disrupt. The Magic phase was ineffectual this time and again no casting from me.

Steve again advanced across the table and I knew in Steve’s next I was going to get charged. Steve’s wolves and Fast cavalry were also getting a position where they could charge my Rot Flies.

Turn three I just stayed in position and tried to buff my units for the coming onslaught.

Here they come. The Skullcrushers, warriors and General all declared charges on one of my Plaguebearer units but the Warriors failed there charge which was of great relief to me. The first round of combat was horrible with my unit champion falling to the mighty sword of the chaos general without replying. I got a wound on the Skull crushers which was a bonus as I killed a model due to the earlier wounds.Steve’s wounds were at a + on the first charge but I managed to save a few due to my 5+ ward save. Of course I lost the combat but due to resolution not by much but still ended up losing more models due to my instability.

My turn four and I charged my General who was in a prepared position into the flank of the Skullcrushers. The Chaos general tried to pick a fight with my Herald but I came of unharmed. The unit took more wounds but at least my general was able to hit a bit harder than my Plaguebearers and get some wounds on the Skull crushers. I still lost combat and more models this was getting worrying as I was going to lose ranks very soon.

The fight continues and Steve’s Trolls charge a Beast of Nurgle, I manage to survive the combat by killing a Troll and rolling under my leadership. The main combat continues and the Herald survives again each side continues to lose models but I make a leadership test. Steve positions his wolves in a tempting position. And the Fast cavalry unit jumps off the table to claim Steve’s objective, as if he needs more reserves!!

My turn five and I charge the wolves with my Flies because I can see a coming threat from Steve’s warriors and I just want my Flies out of the way but they fail miserably and are left hanging in the wind. The main combat continues but this time the Chaos general switches his attacks to the unit of Plaguebearers because Steve has to try and wipe out a unit to win the game.

Steve charges the Flies with his warriors but has to challenge so I survive the first round of combat.

My turn six and I charge a Beast of Nurgle into the flank of the remaining Skullcrusher by this time I have lost 2 ranks of plaguebearers and am hanging on for dear life. I manged to roll an 11 on my leadership test losing 4 wounds on my General and taking down the number of Plaguebearers to 9 out of 30 plus the Herald. The Flies cannot hold on and die against a frenzied attack from the Warriors and die. The Beast that was fighting the Trolls hangs on but dies due to Instability. This is still not enough points for Steve to win the game.

Final round of combat Steve charges his fast Cavalry into my Beast of Nurgle and inflicts no wounds in return the Beast gets a couple of Cavalry, The Great Unclean One kills the final Skull Crusher and 2 Plaguebearers swing their plagueswords at the Chaos general and get 2 poison attacks Steve rolls for his +1 armour save and rolls “Snakes Eyes” a great cheer erupts around the club as I think I have taken him down but then Steve informs me that he also has a +3 Ward save he then promptly rolls double 2 Hurray the win is mine but Steve still want to do combat resolution to force me to take a leadership test but he had forgotten that a Beast of Nurgle has “Slimetrail” so has no flanks for the +1.

Although I had planned for the draw I will definitely take the win as that might see me through to the next round, I will just have to wait and watch the other results as they come in.