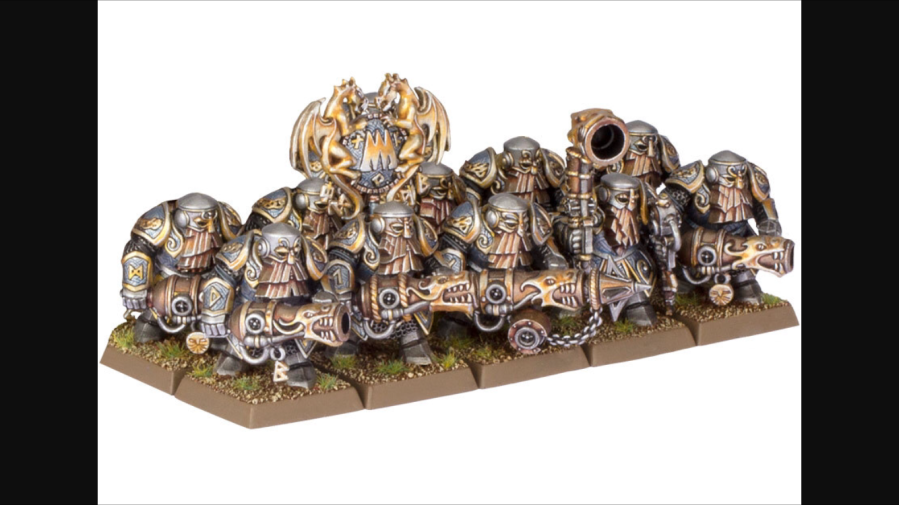 There are very few units, from the dwarf army book, that I would consider an auto include in my lists.

Hammerers are a possibility but more often than not opponents will avoid them like the plague and they become an expensive bunker for the general (although they also cast a 12″ stubborn bubble, if you run it in my preferred groth load out, so not a total waste).

Some players swear by Ironbreakers as the ultimate anvil and with elite dwarf  stats and a 3+/ 5++ save there is an argument for them but with the profusion of high strength attacks in 8th, the save will quickly reduce and the ward is only in h2h combat.

The Irondrakes have the same elite stats as Ironbreakers but with a slightly reduced 4+/ 6++ (non restricted ward), which increases to a 2++ vs fire. This makes them more effective than a unit of shieldbeards, our go to core anvil unit, with the added advantage of an extra point of Leadership (10) and the same 50pt Magic standard allowance. (On a side note, is this the only specialised unit armour that is not available to be purchased by the races characters? I struggle to think of another).

But wait, there’s more. On top of that they get an 18″, flaming, str 5, AP, ranged attack and they are quick to fire meaning they can move and shoot without penalty. The unit champion can be upgraded to dual drake pistols (two, 12″, str 5, flaming, AP, ranged attacks which allows the unit to always stand and shoot) or to the trollhammer torpedo (a 24″, str 8, flaming, d3 wound, slow to fire attack).

Being both a solid anvil and having a high str ranged attack gives them a versatility that our other infantry units lack. They work equally well as a flank or centrally placed unit and adding a stubborn runic banner means they will hold to the last dwarf. The rune of slowness, whilst an obvious and well known choice, is very effective against opponents who rarely face them.

Add in a basic Runesmith to the unit (who can be tooled up to add further depth with items such as the silver horn, breath weapon or even a basic runic weapon to counter ethereals) and their ward becomes 5+ vs direct dmg spells and their h2h attacks gain AP which effectively doubles their combat effectiveness vs armoured troops and if they manage a charge (very likely if the rune of slowness worked as planned) then they get the standard dwarf +1 to str that turn and an effective -3 vs nme armour.

If running a 2500 pt list you get 625 pts in the rare section to play with. For me this will normally be comprised of:

1 organ gun (no runes but with attached engineer, if only to counter BotWD)

18 Irondrakes with standard (1* Ro slowness), champion with dual drake pistols and musician (accompanied by a Runesmith).

This comes to 625pts on the nose (excluding the engineer and Runesmith) and creates a formidable selection of str 5 AP ranged attacks for the throng.

I have been asked on several occasions why I never take the trollhammer. There are a couple of reasons.

So to sum up, Yes they are expensive (15pts a pop) and yes their points come from the rare section but they are only 1pt more expensive than Ironbreakers and all that versatility, wrapped up in one unit, is why I rarely leave home without them.

I hope this has been a useful article on what is, one of my favourite dwarf units.

The life and thoughts of a Jenn